Autobiography of a Monarch Butterfly Update 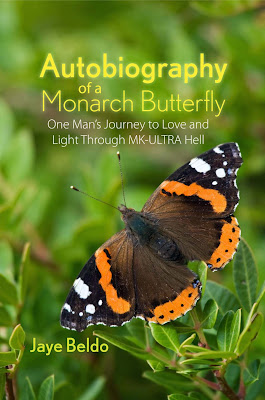 Writing Autobiography of a Monarch Butterfly was difficult in itself-primarily because I had to relive many things in my past that I otherwise would like to forget. It was also a challenge to bring it all together into a coherent gestalt. Even harder was getting the work available to the public, a rite of passage almost as trying as what I had to suffer through in regards to MKULTRA: dealing with unethical publishers, a hydroponically deluded, Merovingian stoner unable to admit to their own incompetence (as well as not being very good at some ensuing curse work designed to sabotage the book) to outsourced labor equally as stoned and irresponsible, to dealing with totally hypocritical and insincere people, one who has publically claimed that they are compassionate towards mind control victims when in reality they are not. Not to mention being stalked and harassed by internet goons whose divinity is so very, very dwarfed, sad to say and most likely will remain so until the end of time.

Robert Sterling of The Konformist posted a blurb about the book under the "Entertainment News" category-quite ironic IMO and he even asked me if I was pulling an Andy Kaufman with this one during a recent phone conversation. Sad to say, I could not say yes and stated my reasons why I think there is a very high probability I was used in bio-warfare and mind control programs . He then asked me if I included the cornball pedophile Boxcar Willie in my book Again, sad to say, I could not say yes and regret not having it in me to fabricate such sensationalist BS. Perhaps I should have because I recently learned via Paul Krassner's book In Praise of Indecency, that Mark Phillips and Cathy O'Brien have sold over 20,000 copies of their Dunce Formation of America book. No doubt the review I wrote of that questionable work and the resulting flame with Philips helped to generate such sales.( Incidentally, their publisher had the gall to send me a press release of another book they wrote.) So, in order to make my auto-bio a commercial success, I'll have to include a perverted little tid-bit that I left out:

When I was five, I remember a black helicopter landing in the backyard and these Day-Glo frisbees shooting out the windows in all directions. I went outside, picked one up, turned it over and examined a photograph burned into the plastic of the Rat Pack dressed up like Mouseketeers but with very revealing S and M garb. Underneath the picture, was the phrase: Come to Our Love Party-You are the Chosen One. I looked up at the congealing clouds and could see Capt. Kangaroo holding hands with Father Flanagan. Perhaps I was to become Boy's Town child God, who would melt the character armor from the pelvic girdles of right wing Christians, politicians and businessmen-that's the message they conveyed to me although at the time I could not understand. They kept puckering their lips and expected me to follow the calisthenics. Then some Praying Mantis aliens wearing edible lingerie gave me a birthday cake with Sumerian hieroglyphs on it-a code to get the chamber door under Memphis Tennessee to open into the Illuminati's plush and inflatable romper room where a fetal Lady Gaga was enshrined.

Well, at least that vivid confession would get me on Coast to Coast or engaged in some prolonged etymological legerdemain with William Henry.

For me personally, the most difficult thing now is not the to-be-expected weirdness at large, but rather the utter indfference and inability of most people to even remotely empathize or even care about mind control victims. This certainly has been my post publishing experience. Even more difficult is dealing with the resentment of others who are unable or unwilling to get on the healing path. If you yourself are in the process of breaking free of mind control and/or addiction and are truly doing the work required to do so, make sure you prepare yourself for this kind of relentless and underhanded opposition to you becoming whole-from both human and non-human sources. The best thing to do, is to forgive those that oppose you, because they too fear change esp. if it is of a positive nature. More importantly, they do not have the capacity of understanding to accept mind control as being a real thing and MK perps certainly take advantage of this. The trials and tribulations will never end and you very well may be shocked beyond belief when you see the reality, the truth underneath well polished façades of "compassion". Just remember to always love yourself, be all-one instead of alone and become self-reliant as I have suggested all throughout Autobiography of a Monarch Butterfly.

I really like when people are expressing their opinion and thought. So I like the way you are writing

What is the butterfly on the cover. It's certainly not a Monarch Butterfly. Or is that part of the joke?