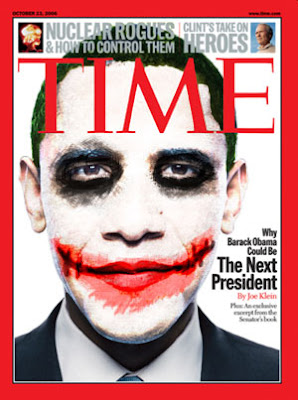 "After Obama was elected, you had all of these people who basically saw him as the second coming of Christ. "From my perspective, there wasn't much substance to him... In terms of domestic policy, I don't think he's really doing much good for the country right now. We don't have to 'hero worship' the guy."

When cryptic posters portraying President Obama as the Joker from "Batman" began popping up around Los Angeles and other cities, the question many asked was, Who is behind the image?

Was it an ultra-conservative grassroots group or a disgruntled street artist going against the grain?

Nope, it turns out, just a 20-year-old college student from Chicago.

Bored during his winter school break, Firas Alkhateeb, a senior history major at the University of Illinois, crafted the picture of Obama with the recognizable clown makeup using Adobe's Photoshop software.

Alkhateeb had been tinkering with the program to improve the looks of photos he had taken on his clunky Kodak camera. The Joker project was his grandest undertaking yet. Using a tutorial he'd found online about how to "Jokerize" portraits, he downloaded the October 23 Time Magazine cover of Obama and began digitally painting over it.

Four or five hours later, he happily had his product.

On Jan. 18, Alkhateeb uploaded the image to photo-sharing site Flickr. Over the next two months, he amassed just a couple thousand hits, he said.

Then the counter exploded after a still-anonymous rogue famously found his image, digitally removed the references to Time Magazine, captioned the picture with the word "socialism" and hung printed copies around L.A., making headlines.

Alkhateeb's original Flickr page surpassed 20,000 views. The Times found his Flickr site last week thanks to a tip left by a loyal reader of The Ticket. By Friday, the page had been taken down.

On Alkhateeb's page, a manipulated image condemning fellow Chicagoan and White House Chief of Staff Rahm Emanuel (captioned "epic fail") was mixed in with parodies of the "Guitar Hero" game franchises -- dubbed Quran Hero -- and of Napoleon riding a motorcycle.

Flickr had removed the Joker image due to copyright-infringement concerns, Alkhateeb says the company told him in an e-mail. A Flickr spokeswoman declined to comment due to a company policy that bars discussing inquiries about individual users.

Alkhateeb says he wasn't actively trying to cover his tracks, but he did want to lay low. He initially had concerns about connecting his name with anything critical of the president -- especially living in Chicago, where people are "very, very liberal," he said.

"After Obama was elected, you had all of these people who basically saw him as the second coming of Christ," Alkhateeb said. "From my perspective, there wasn't much substance to him."

"I abstained from voting in November," he wrote in an e-mail. "Living in Illinois, my vote means close to nothing as there was no chance Obama would not win the state." If he had to choose a politician to support, Alkhateeb said, it would be Ohio Democratic Rep. Dennis Kucinich.

Possibly becoming a villain in his home city wasn't his only worry. Time's cover and the Joker obviously aren't Alkhateeb's copyrights to fool around with.

Concerned about a lawsuit, Alkhateeb, an unnamed superstar whose nationally recognized artwork had stunned friends and family, was relieved that the situation had floated for months without any major news organizations discovering that he was the man behind the paint.

After we contacted him, he hesitantly agreed to an interview.

If it's any consolation, the Electronic Frontier Foundation, a nonprofit organization that defends digital rights, says Alkhateeb has a strong fair-use defense if Time or DC Comics decides to take him to court -- that is if one even does file a lawsuit.

"You really want to think twice about going after a political commenter," said Corynne McSherry, a senior staff attorney at the EFF. In Time's case, "a news organization probably doesn't want to be in the situation of pursuing political criticism."

Perhaps the strongest case for anyone, McSherry said, is for Alkhateeb to claim money derived from people selling T-shirts with his picture. Is it worth pursuing? "It would be nice, but it's not that big of a deal," Alkhateeb said.

Although Alkhateeb claims he was making no political statement with the artwork, he's plugged into the Washington debate. Though born in the United States, his Palestinian family closely follows Middle Eastern politics.

"I think he's definitely doing better than Bush was," Alkhateeb said of Obama. Alkhateeb's views on foreign relations align with the Democrats, he said, while he prefers Republican ideals on domestic issues.

Alkhateeb's assessment of Obama: "In terms of domestic policy, I don't think he's really doing much good for the country right now," he said. "We don't have to 'hero worship' the guy."

Someday, Alkhateeb hopes to be a history teacher and high school football coach. He won't be pursuing a full-time career in art, but he'll continue playing with Photoshop on the side. He's honored by Shepard Fairey's assessment of his Joker picture, but disagrees with some of Fairey's comments criticizing the message of the Socialism poster.

"He made a picture of Bush as a vampire," Alkhateeb said about Fairey. "That's kind of speaking with two faces."

Regardless, Alkhateeb does agree with the Obama "Hope" artist about "socialism" being the wrong caption for the Joker image. "It really doesn't make any sense to me at all," he said. "To accuse him of being a socialist is really ... immature. First of all, who said being a socialist is evil?"
-- Mark Milian

very useful read. I would love to follow you on twitter. By the way, did you hear that some chinese hacker had busted twitter yesterday again.
[url=http://amazon.reviewazone.com/]Virginia[/url]

Virtual Memory sure is becoming cheaper these days. I wonder when we will eventually reach the ratio of $0.01 to 1 Gigabyte.

I'm eagerly anticipating the day when I will finally be able to afford a 20 TB hard drive, lol. But for now I guess I will be happy with having a 32 GB Micro SD Card in my R4i.