Don't Need To Be a Rocket Scientist 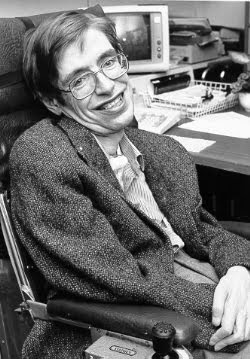 Robalini's Note: As you may guess, I am opposed to the Obama health care plan, which I consider a cynical fraud to evade any actual real reform of health care. (Modus operandi for Obama.) Still, while progressives continue to carry water for a bus-throwing betrayer..., the GOP and the right-wing slime machine intentionally lies and misdirect the opposition to Obama so the debate has nothing to do with reality. Case in point below...

Once you thoroughly unfasten yourself from reality, truly all things are possible.

AJC columnist Jay Bookman noticed that in the latest Investors Business Daily editorial about how the 'death panel' will condemn all handicapped or disabled people to death on some horrid wind-swept mountain, the editors note that ...

People such as scientist Stephen Hawking wouldn't have a chance in the U.K., where the National Health Service would say the life of this brilliant man, because of his physical handicaps, is essentially worthless.

Needless to say, Hawking, who is recognized as one of the great theoretical physicists of the 20th and 21st century, was born in the UK and has lived his entire life there.

It doesn’t take Stephen Hawking to figure this one out
Jay Bookman
August 10, 2009

The conservative opinion magazine Human Events was reputedly Ronald Reagan’s favorite read, and to this day fancies itself the house organ for the hard-right intelligentsia. Among those published regularly in its pages are such luminaries as Newt Gingrich and Ann Coulter.

In my email this morning is a message from Human Events regarding the health-reform debate, warning of “government-forced extermination” of unborn children, grandmothers and grandfathers:

Investors Business Daily has just exposed the Achilles’ heel of Obamacare, that hostile, socialist government takeover of your hospital, doctors, children, and grandparents. In an editorial entitled, “How House Bill Runs Over Grandma,” the editors report how President Obama was personally confronted by a North Carolina woman asking if “everyone that’s Medicare age will be visited and told they have to decide how they wish to die.”

In response Obama joked that he hadn’t yet hired enough bureaucrats to conduct such an operation, yet he could not deny the New York Post’s discovery the House bill “compels seniors to submit to a counseling session every five years (and more often if they become sick or go into a nursing home) about alternatives for end-of-life care” (pages 425-430). In other words, your grandmother will be told, when insufficient resources are rationed to young people, that her duty to die begins with mandatory “end-of-life counseling,” or as Obama explained, “encourage the use of living wills” that terminate otherwise salvageable lives prematurely through signed “do not resuscitate” (DNR) legal releases.”


In other words, these people have gone full-blown lunatic on us. Curious, I also looked up the Investors Business Daily editorial cited by Human Events. Published a week ago Friday, it is chock full of lies, distortions and other foolishness, such as the claim that the House bill would compel senior citizens to undergo mandatory euthanasia counseling every five years.

But my favorite part of the editorial deals with the British health-care system, which if you believe IBD is basically condemning the old and disabled to die.

“People such as scientist Stephen Hawking wouldn’t have a chance in the U.K., where the National Health Service would say the life of this brilliant man, because of his physical handicaps, is essentially worthless,” the editorial claims.

UPDATE: Investors Business Daily has corrected its editorial, removing all mention of Stephen Hawking. And Hawking himself has responded, telling the UK’s Guardian:

“I wouldn’t be here today if it were not for the NHS. I have received a large amount of high-quality treatment without which I would not have survived.”
Posted by Robalini at Tuesday, August 18, 2009