How Many Muppets Died To Clothe Lady Gaga? 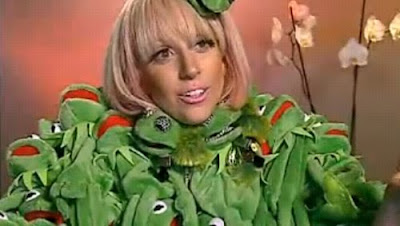 Lady Gaga is not only a worldwide pop star but also a fashion icon, but lately her choices can be considered boundary-pushing even for a forward-thinker like herself. She gave a TV interview in Malta while wearing a strange mask, and she appeared on German television wearing something that looked like a giant lamp shade. But her most recent appearance is her most out-there yet. While doing another interview in Germany, Gaga showed up wearing a top made entirely out of sewn-together Kermit the Frog dolls. She even had a Kermit-based hat that somehow stayed atop her head. The effect is surreal, to say the least.