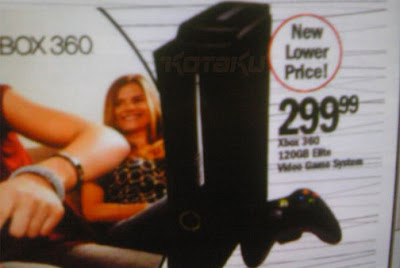 Treat this right now as very likely, but still a rumor--a photo of a catalog page posted to Kotaku shows the 120GB hard drive-and-HDMI Xbox 360 Elite going for $299. The Meijir catalog (a Midwest store chain) in question is slated for August 30, which would mean a nice holiday surprise for future Xbox 360 buyers.

Other rumors have it that the price-dropped Elite and the bare-bones, hard-drive-free Arcade system will be the only 360s left on the market. It's a move that makes sense, since 120GB is not exactly a luxurious amount of storage space anymore, and is far more suitable for the mainstream than a fine-in-2005-but-now-piddling 20GB.

The 360 wasn't the system that most needed a price drop, after all. But then again, Sony might be following close behind with a cheaper (and redesigned) counterpunch of their own.

This leaves the Xbox 360 Elite at a price that's only $50 more than a Wii. And, for that price, you get a system that streams Netflix, plays DVDs, has robust online gameplay, and has far more storage than Nintendo's white box (even adding in a mountain of SD cards).

While we have absolutely no problem with getting more Xbox 360 for less, this raises a rather sharp sticking point with the prices of Microsoft's proprietary Xbox hard drives. An impassioned rant from Gizmodo accurately and appropriately skewers the currently ludicrous $160 retail cost of the 120GB hard drive. When half a terabyte can be had for the same--and when Microsoft, after all, wants us to buy more downloads than ever before--this hardly seems logical. Then again, maybe hard drive price drops/capacity increases are also on the horizon. In fact, wouldn't that be expected? If 120GB is the mainstream, there has to be a larger capacity to upgrade to.

Or, even better: Wi-Fi built in, and a slimmer, more reliable 360. How about that?

Scott Stein, a New York Jets fan and CNET senior associate editor, has written about tech, entertainment, video games, and viral culture for outlets including Laptop, Wired, Maxim, Esquire Online, Asylum, and Men's Journal. He also appears on the Digital City podcast. In his spare time, you might see him performing improv in New York City (when he's not being a dad).
Posted by Robalini at Tuesday, August 18, 2009

It is a great thing to be able to play the free games online. You just have to download several of them from the Internet.