The Birthers Got "Punk'd" With Fake Certificate 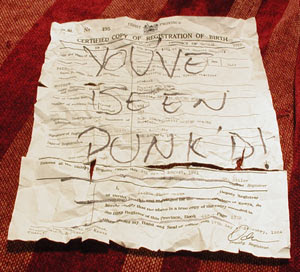 The Birthers Got "Punk'd" With Fake Certificate
By Eric Kleefeld
August 6, 2009

It now looks like the forged "Kenyan" Obama birth certificate that was briefly promoted by the Birthers -- actually an altered copy of a decades-old South Australian birth certificate -- was deliberately designed as a prank on the Birther movement itself, Dave Weigel reports.

An anonymous person has put up an Internet posting showing photos of the document, against a bedsheet background that matches the photo promoted by Orly Taitz. One of the photos shows a crumpled up certificate with the following message written on it: "YOU'VE BEEN PUNK'D!"

The forgery was apparently created using fine cotton business paper, an inkjet printer, an old manual typewriter, and a fountain pen. The supposed government seal is actually an imprint made with an old two-shilling coin. (Pre-decimal British money can easily be purchased from souvenir vendors or on eBay.)

As the anonymous poster says: "Punkin' the Birthers: Priceless."
Posted by Robalini at Tuesday, August 18, 2009

Email ThisBlogThis!Share to TwitterShare to FacebookShare to Pinterest
Labels: Birthers