Bootsy Collins Has His Own Restaurant 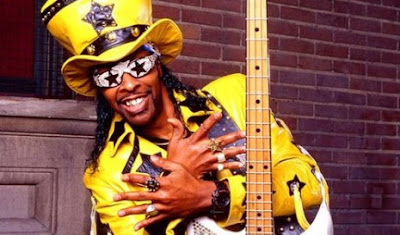 http://www.dangerousminds.net/index.php/site/comments/bootsy_collins_has_his_own_restaurant/
Bootsy Collins Has His Own Restaurant
08.02.2009

It looks like funkmaster supreme, Bootsy Collins has jumped onto the celebrity restaurant bandwagon—made a mint for BB King and Kenny Rogers, didn’t it? But I suspect in Bootsy’s case, it looks like he just licensed his name and some of his memorabilia to restaurateur, Jeff Ruby.

If you take the 3-D virtual tour around Bootsy’s, now open in Cincinnati, Ohio, you’ll notice that some of the memorabilia doesn’t appear to have belonged to Bootsy after all. Like I don’t believe that he ever had a poster of the young Beatles in his home, do you? Who made the decision to hang that up? “We need some things that white people like, too. All white people love the Beatles, don’t we?”

I also do not believe that Bootsy has ever personally eaten the vegan sushi.

We want the funk! Gotta have that funk YOWWWWWW….

Posted by Richard Metzger
Posted by Robalini at Friday, August 07, 2009

While people may have different views still good things should always be appreciated. Yours is a nice blog. Liked it!!!