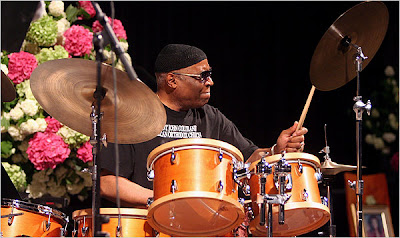 The cause was a heart attack, said his wife, Patricia Ali.

Mr. Ali, who first encountered Coltrane in their Philadelphia neighborhood in the late 1950s, made the leap from admiration to collaboration in the mid-1960s, when he joined Elvin Jones as a second drummer with Coltrane’s ensemble at the Village Gate in November 1965.

Mr. Ali recorded with Coltrane and Jones on the 1965 album “Meditations” and, after replacing Jones as Coltrane’s drummer, on the duet album “Interstellar Space” (1967), one of the purest expressions of the free-jazz movement.

“I didn’t know what it was, but he called it multidirectional rhythms,” Mr. Ali said of his drumming in an interview for the documentary “The World According to John Coltrane” (1990). On Mr. Ali’s Web site, rashiedali.org, Rashid Ali's Web site his playing is described as “a multirhythmic, polytonal propellant, helping fuel Coltrane’s flights of free-jazz fancy.”

Mr. Ali was born Robert Patterson into a musical family in Philadelphia. He started out on piano and dabbled with trombone and trumpet before finding his way to the drums, which he began to play seriously while serving with Army bands during the Korean War. Perhaps thanks to his military experience, he always executed drumrolls with crisp precision.

On returning to Philadelphia, Mr. Ali played in local rhythm-and-blues and rock ’n’ roll groups before moving on to jazz. He studied with Philly Joe Jones and paid close attention to heroes like Max Roach and Art Blakey, but a turning point came when he listened to Coltrane’s recordings with Jones. “Instead of being a timekeeper drummer, I wanted to play more,” he recalled for the Coltrane documentary.

Mr. Ali moved to New York in 1963 and began playing with progressive jazz musicians like Don Cherry, Pharoah Sanders, Archie Shepp and Albert Ayler. His first important recording was with Shepp on the album “On This Night.”

After pestering Coltrane to be allowed to sit in with his group at the Half Note jazz club and eventually getting a chance one evening, Mr. Ali passed up the golden opportunity to perform as a second drummer with Jones on the album “Ascension,” the seminal record of the free-jazz movement. He later realized his mistake and accepted second-drummer status at the Village Gate and on “Meditations.”

After Coltrane’s death in 1967, Mr. Ali performed with Alice Coltrane and then toured Europe. Returning to New York, he opened a club, Ali’s Alley, in a building he bought in SoHo, then in its early bohemian phase. The club, a showcase for free-jazz musicians, was at the center of the loft jazz scene of the 1970s. It operated until 1979, and Mr. Ali lived in the building for the rest of his life.

From the 1980s until his death, Mr. Ali performed and recorded with several avant-garde groups, including Phalanx, By Any Means and Prima Materia, an ensemble devoted to interpreting the music of Coltrane and Ayler. Most recently he appeared with the Rashied Ali Quintet, which he formed in 2003, and performed as a duo with the saxophonist Sonny Fortune.

Besides his wife, he is survived by two brothers, the jazz drummer Muhammad Ali and Theodore Patterson, both of Philadelphia, and nine children.

“He could play straight, put down the time and swing,” the critic Stanley Crouch said. “He had a good command of his instrument. He once told me that he thought of himself as playing in 4/4, but the other realms of 4/4 that we don’t usually hear.”
Posted by Robalini at Sunday, August 23, 2009

I recently came across your blog and have been reading along. I thought I would leave my first comment. I dont know what to say except that I have enjoyed reading. Nice blog. I will keep visiting this blog very often.