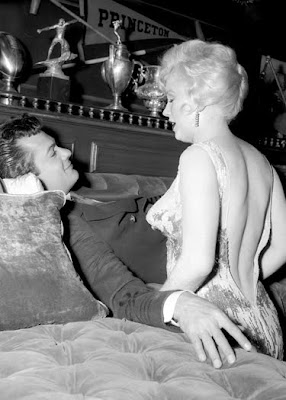 Tony Curtis knocked up blonde icon during filming of Some Like it Hot!

Sure there was plenty of steamy on-screen chemistry during the filming of gender challenged hoo-hah by director Billy Wilder as lover doll Tony Curtis admitted to The ENQUIRER during a historic one-on-one video interview but now Tony has even MORE to tell.

In Tony's new tome The Making of Some Like it Hot, Curtis, 84, reveals that he and Marilyn had an affair during lensing. Soon, MM was carrying a little Tony.

Even though both were married - he to Janet Leigh and she to playwright Arthur Miller- neither gave their spouses a second thought when it came time to do the horizontal mambo.

In October 1958 Curtis and Miller had a heated discussion in her dressing room about the love child Marilyn was carrying.

Miller thought the child his but Marilyn and Tony believed otherwise.

After the truth came out and cameras stopped rolling, the affair ended and sadly Marilyn suffered a miscarriage never knowing the joys of motherhood - Bernie's Schwartz notwithstanding.