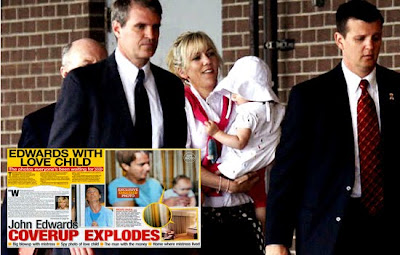 BOMBSHELL WORLD EXCLUSIVE! John Edwards has secretly undergone a DNA test - and it proves he's the father of his mistress' love child, The ENQUIRER has learned exclusively.

Edwards - who hotly denied he was the child's father when he publicly confessed his affair with Rielle on ABC's Nightline a year ago - has broken the news to his cancer-stricken wife Elizabeth, sources say.

But The ENQUIRER has also learned that Rielle testified against Edwards before a federal grand jury that's probing whether he broke campaign finance laws by secretly funneling money to her - and her testimony could send the former North Carolina senator to jail!

The positive DNA test finally ends the elaborate cover-up that Edwards engineered to hide the fact that he fathered Rielle's 18-month-old daughter Frances.

As The ENQUIRER previously reported in a series of explosive investigative reports, the cover-up involved "hush money" paid to Rielle and Andrew Young, a once-loyal Edwards aide who claimed he'd fathered her child. The secret payments were made by the late Fred Baron, who was Edwards' national finance chairman.

With Young being left out to dry by Edwards, he pulled a "John Dean" to testify before the grand jury before he could publish his tell-all book about the conspiracy.

"Rielle had no choice but to demand John take a DNA test," said the close friend.

"She was worried about getting long-term financial support for her daughter. So she hired an attorney, and John consented to undergo a secret swab test to establish paternity.

"There was no surprise: The results of the DNA test proved John was Frances' daddy."

Another source confirmed to The ENQUIRER: "John always knew he was the father of Rielle's baby.

"Despite the ongoing financial negotiations, sources say Rielle testified against Edwards in front of the grand jury, spending nine hours inside the courthouse on Aug. 6 in Raleigh, N.C.

Rielle's testimony against Edwards came as a "cooperating witness" for the government, added a source familiar with the investigation.

"Rielle is not dumb. She knew the feds had subpoenaed her bank statements and knew about every payment she received," said the source.

"The FBI told her it was in her best interests to tell the truth, and she did. And unlike the others who have testified, Rielle was driven to the court by FBI agents and escorted in by them. She got favorable treatment because she testified against John."

FOR THE FULL STORY with all the details you won't find anywhere else get the latest ENQUIRER on sale now!
Posted by Robalini at Tuesday, August 18, 2009