A Bacon Sandwich That Uses Fried Chicken As "Bread" 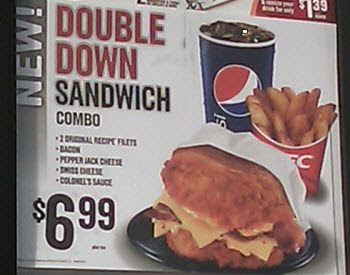 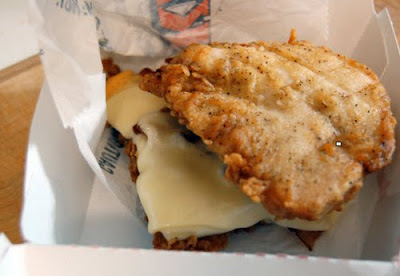 This is perhaps man's greatest achievement or evidence of our civilization's impending doom. Maybe it's both.

Meet the KFC "double down." Although no mention of it is made on KFC.com and we have never seen an ad for it ourselves, we are being lead to believe that it is real by Foodgeekery.com. They have crappy cell phone camera footage of a commercial (from Omaha, apparently) for the mysterious beast, as well as photographic evidence of it in the wild.

The sandwich consists of two fried chicken fillets wrapped around bacon, cheese and Colonel's sauce. It apparently tastes like you think it would. An early-adopter explains:

That's it? That is the sandwich? That's not worth five dollars. Oh… oh my God. That is the best thing ever. I don't know what "Colonel's Sauce" is, but it is like a party in my mouth. This is completely worth the five dollars. Unfortunately I'm going to end up weighing 700 lbs after this, but it is simply amazing.

Email ThisBlogThis!Share to TwitterShare to FacebookShare to Pinterest
Labels: KFC

nutritionist and dietist will be happy! what about health?
it' crazy...
bye
Blas