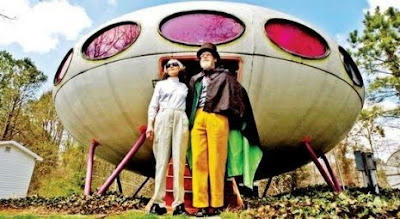 Hiran Ratnayake from Delawareonline.com wrote: “Towns have passed laws to deal with it and numerous gadgets have been developed to protect from it. But few have taken their hatred for noise as far as Houston’s Barney Vincelette.

A case of mild autism has made him extremely sensitive to noise. Vincelette, who lives in a spaceship-style house, thinks music, especially top 40, rap and rock ‘n’ roll, ‘sounds the same way feces smells.’

Vincelette used his genius-level IQ and parts of household microwave ovens to develop a makeshift device that uses electromagnetic waves to temporarily jam the circuitry of his neighbors’ stereos.

Barney Vincelette purchased his unusual house from a catalog and erected it on his Houston lot. While he revels in its ‘geometric simplicity,’ his wife, Carol, says it doesn’t have enough space.”
Posted by Robalini at Sunday, August 23, 2009

Email ThisBlogThis!Share to TwitterShare to FacebookShare to Pinterest
Labels: Houston