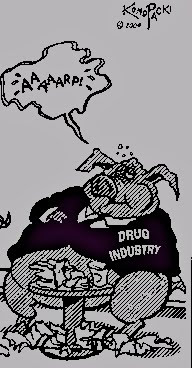 by Greg Palast
Thursday, August 13, 2009
For The Huffington Post

Eighty billion dollars of WHAT?

I searched all over the newspapers and TV transcripts and no one asked the President what is probably the most important question of what passes for debate on the issue of health care reform: $80 billion of WHAT?

On June 22, President Obama said he'd reached agreement with big drug companies to cut the price of medicine by $80 billion. He extended his gratitude to Big Pharma for the deal that would, "reduce the punishing inflation in health care costs."

Hey, in my neighborhood, people think $80 billion is a lot of money. But is it?

I checked out the government's health stats (at HHS.gov), put fresh batteries in my calculator and toted up US spending on prescription drugs projected by the government for the next ten years. It added up to $3.6 trillion.

Hey thanks, Barack! You really stuck it to the big boys. You saved America from these drug lords robbing us blind. Two percent. Cool!

For perspective: Imagine you are in a Wal-Mart and there's a sign over a flat screen TV, "BIG SAVINGS!" So, you break every promise you made never to buy from that union-busting big box - and snatch up the $500 television. And when you're caught by your spouse, you say, "But, honey, look at the deal I got! It was TWO-PERCENT OFF! I saved us $10!"

But 2% is better than nothing, I suppose. Or is it?

The Big Pharma kingpins did not actually agree to cut their prices. Their promise with Obama is something a little oilier: they apparently promised that, over ten years, they will reduce the amount at which they would otherwise raise drug prices. Got that? In other words, the Obama deal locks in a doubling of drug costs, projected to rise over the period of "savings" from a quarter trillion dollars a year to half a trillion dollars a year. Minus that 2%.

We'll still get the shaft from Big Pharma, but Obama will have circumcised the increase.

And what did Obama give up in return for $80 billion? Chief drug lobbyist Billy Tauzin crowed that Obama agreed to dump his campaign pledge to bargain down prices for Medicare purchases. Furthermore, Obama's promise that we could buy cheap drugs from Canada simply went pffft!

What did that cost us? The New England Journal of Medicine notes that 13 European nations successfully regulate the price of drugs, reducing the average cost of name-brand prescription medicines by 35% to 55%. Obama gave that up for his 2%.

The Veterans Administration is able to push down the price it pays for patent medicine by 40% through bargaining power. George Bush stopped Medicare from bargaining for similar discounts, an insane ban that Obama said he'd overturn. But, once within Tauzin's hypnotic gaze, Obama agreed to lock in Bush's crazy and costly no-bargaining ban for the next decade.

What else went down in Obama's drug deal? To find out, I called C-SPAN to get a copy of the videotape of the meeting with the drug companies. I was surprised to find they didn't have such a tape despite the President's campaign promise, right there on CNN in January 2008, "These negotiations will be on C-SPAN."

This puzzled me. When Dick Cheney was caught having secret meetings with oil companies to discuss Bush's Energy Bill, we denounced the hugger-muggers as a case of foxes in the henhouse.
Cheney's secret meetings with lobbyists and industry bigshots were creepy and nasty and evil.

But the Obama crew's secret meetings with lobbyists and industry bigshots were, the President assures us, in the public interest.

We know Cheney's secret confabs were shady and corrupt because Cheney scowled out the side of his mouth.

Obama grins in your face.

Palast studied healthcare economics at the Center for Hospital Administration Studies at the University of Chicago.

Greg Palast's investigative reports can be seen on BBC Television's Newsnight and, in print, at GregPalast.com.
Posted by Robalini at Tuesday, August 18, 2009