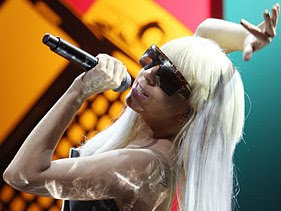 Aug 12 2009
Can Lady Gaga Top These Iconic MTV VMA Performances?
From Madonna's 'Like a Virgin' to Rihanna's layer cake, Gaga's got plenty of pop diva inspiration for her VMA debut.
By Jocelyn Vena

Not only is Lady Gaga up for nine Moonmen at the VMAs this year as they embark on the singer's hometown of New York, but she's also just been tapped to perform at the live show on September 13 at 9 p.m. ET.

Gaga has yet to disappoint with her TV appearances on "American Idol," "Dancing With the Stars" and even "The Ellen DeGeneres Show" this year, so for a show as big as the VMAs, the expectations are high. Not only will the fashion-forward star have to top herself, but also the divas and pop princesses who have left indelible marks on the ceremony over the years. Just last year, Rihanna emerged from a towering industrial layer cake, and Pink set off explosions and smashed windows. Clearly, the same old song-and-dance doesn't cut it anymore.

Britney Spears has hit the VMA stage with stripper poles, nearly naked and wrapped in snakes. She's graced the stage as a solo act and collaborated with 'NSYNC, as well as Christina Aguilera and Madonna. Sometimes, as was the case at the 2008 VMAs, Spears doesn't even have to perform to be the star of the show.

But there would be no Britney if Madonna hadn't been there first. There's no one who gets the magic of MTV's biggest spectacle more than the Material Girl, who has tried it all and worn it all. She's dressed in Marie Antoinette garb for her performance of "Vogue" in 1990. In 1993, she channeled Marlene Dietrich for her performance of "Bye Bye Baby." And then she went all Hindi-spiritual for her "Ray of Light" performance in 1998. We all know that Gaga appreciates a costume or two, so any one of those should provide her with inspiration.

Of course, the biggest performance to beat may be Madonna's 1984 VMA appearance. Clad in a wedding dress and lacy white gloves, Madonna officially became the reigning queen of pop when she rolled around on the stage at Radio City while singing, "Like a Virgin." The performance was anything but virginal. Madonna even paid tribute to it, along with Spears and Aguilera, in 2003.

Although there's no word yet on which hit Gaga will be performing come September 13, we're sure she'll go big.

The 2009 MTV Video Music Awards will take place September 13 at 9 p.m. ET. Additional celebrity presenters and performers will be announced in the coming weeks. To be the first to find out the inside scoop, follow the Inside MTV Twitter account at Twitter.com/InsideMTV.
Posted by Robalini at Tuesday, August 18, 2009