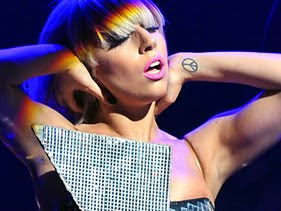 Part 237 of a series: Robalini’s continuing fascination with Lady Gaga…

This is what I've been saying since April, when I finally actually bothered to listen to Lady Gaga's The Fame. I heard the middle part of "Poker Face" on the radio, and the last time I had been so impressed by a hard rock band was when I heard Rage Against the Machine do "Bulls on Parade." Of course, this wasn't a hard rock band, it was a disco diva, and I immediately realised that a lot of people (including myself) were clearly not paying attention to something that was about to become way bigger than anyone seemed to realize.

Imagine, for a second, that Lady Gaga didn't dress like a member of wrestling team Demolition, pose for fashion spreads wearing nothing but the rings of Saturn around her head or give interviews dressed in the carcasses of Kermit the Frog. Imagine if she didn't speak her mind, delight in tweaking the media or treat her fame as one gigantic, Warholian art project. In other words, imagine if she were just another boring, bottle-blond, midriff-bearing pop star.

I know all that is pretty difficult to consider — without any of the flair or the insanity or the nudity, Gaga just wouldn't be Gaga — but if you somehow managed to strip away all the ephemera, what would you have left? Would Gaga still be interesting? Would she still have sold 1.3 million copies of The Fame here in the U.S., or have been nominated for nine MTV Video Music Awards? Would she be announced, in the same breath as Jay-Z no less, as a VMA performer?

We'll never know, of course. But while Gaga: The Pop-Art Project is what sells magazines (and albums), Gaga: The Pop Star is where the attention ought to lie. As paparazzi bait, she's pretty great, but as a musician, as a vessel and a muse, she's even better.

I only discovered this recently, when I finally got around to listening to her debut disc, The Fame, which was released almost exactly one year ago today (I've been busy). As a music critic, ignoring on one of '09's breakout hits is rather inexcusable, but I would feel much worse about it if I didn't suspect roughly 99 percent of the music-buying population of being guilty of the same thing: It seems we all know Lady Gaga, but we don't have any idea who she is as an artist.

So, I advise everyone to sit down and really listen to The Fame. Forget about the monster singles — "Just Dance," "LoveGame," "Paparazzi" and "Poker Face" — something which is pretty easy to do on the U.S. version of the album, which re-sequences them as the first four tracks, and just focus on the rest. What you're left with is 10 slickly produced, genre-mashing, joy-inducing, PMRC-infuriating pop/dance tracks, a standalone album in its own right.

"Eh, Eh (Nothing Else I Can Say)" is a breezy, vaguely Carribbean electro-pop gem, recalling Madonna's "La Isla Bonita," Paula Abdul's "Forever Your Girl" and basically the entire Deborah Gibson/Tiffany canon (this is a good thing). "Beautiful, Dirty, Rich," struts on a wobbly bass punch that's reminiscent of the Talking Heads' "Once in a Lifetime" and some cracking live drums, and "The Fame" is a super-charged, buzzing ode to the glamorous life.

"Money Honey" has Gaga vamping — and showing off some serious pipes — over a hornet's nest of electronics. "Boys Boys Boys" has her fantasizing about making out with a boy in retro sneakers at a Killers concert. "Brown Eyes" is a somber, stop-start power ballad, a lover's lament that seems out of step with everything you think you know about L.G., and "I Like It Rough" is a shimmery, whirring Jazzercise soundtrack that's probably one of one of my favorite tunes of the year (or last year, whatever). Oh, and album-closer "Summerboy" sounds like a Strokes song, only with Debbie Harry on vocals.

The point is, this is a great album. Gaga shines brightly, but so does the production work of RedOne and Martin Kierszenbaum, which flits between chrome-clean futurism and scratched, hazy retro, somehow managing to capture Gaga's NYC party past, present and (probably) future. It's an accomplished, sexy, funny and fun listen, a dazzling run through pop, funk, disco, rock and intelligent dance music (and not, you know, "Intelligent Dance Music"), the kind of thing that I lamented would probably never get big in the States just last year. Only somehow, against all odds, it has.

The Fame is darn near close to perfection. And it's proof that Gaga is more than just that weird, pantsless pop star running around Europe with a bow in her hair and a tea cup in her hand. She's a musician, she's a vessel, she's a star. Some of you are probably aware of this already, but to most of you, this is breaking news. You think you know Gaga, but you have no idea.

Questions? Concerns? Hit me up at BTTS@MTVStaff.com
Posted by Robalini at Tuesday, August 18, 2009