A Museum Devoted to a National Snack Obsession 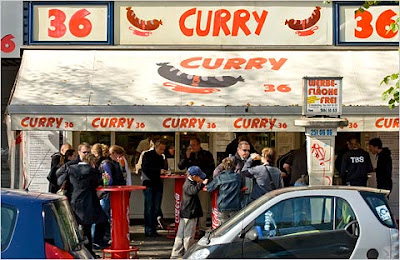 August 4, 2009
A Museum Devoted to a National Snack Obsession
By Gisela Williams
Currywurst may be Germany’s favorite snack food.

BERLIN There’s no doubt that Germans love their currywurst, a national fast food favorite that consists of fried pork sausage served with a sauce typically made from ketchup and curry powder. And there’s no other German city more obsessed with currywurst than Berlin. It is it often said that the dish was invented in the city by a woman named Herta Heuwer in 1949 (though Hamburg also claims to be the its birthplace). Soon the city will be celebrating the opening of a museum dedicated entirely to the humble snack.

The Currywurst Museum (Schutzenstrasse 70; www.currywurstmuseum.de), opening, on Aug. 15, is the vision of Martin Löwer, a marketing executive and passionate currywurst enthusiast who managed to raise the project’s five million euro budget from private investors.

Löwer expects 350,000 visitors a year. The museum’s location — next to the Checkpoint Charlie museum, a stop popular with bus tours and wandering tourists — should help.

But it’s still up for debate whether or not non-Germans be willing to pony up 7 euros to learn about the city’s favorite porky snack — especially since a sample of the dish is not included.

What one does get for their seven euros is entrance into a 12,000-square-foot space organized by themes like ingredients, celebrity fans, television and movies appearances, and history.

There is also a small theater showing a documentary called “Best of the Wurst,” a reproduction of a currywurst imbiss (snack shop), and a map of the world which shows where to buy currywurst in countries like Thailand and Argentina.

By the end of the year the museum also plans to open an attached but separate lounge that will offer (at a price) a sampling of several different currywurst recipes including sauces created especially for the museum by two of Berlin’s top chefs, Thomas Kammeier and Kolja Kleeberg.

Of course one could always take that entry fee and attempt a do-it-yourself currywurst tour of Berlin.

The city’s fanatics spend hours debating over the city’s best currywurst imbisses, but most agree on a few classics: Konnopkes Imbiss, under the Eberswalder U-bahn station in Prenzlauer Berg; Curry 36 in Kreutzberg; and Imbiss Ku’damm 195, in Charlottenberg, which serves champagne with their currywurst and is open through the night.

Email ThisBlogThis!Share to TwitterShare to FacebookShare to Pinterest
Labels: Berlin