Candy: A Cult Film So Bad That It’s Just Bad 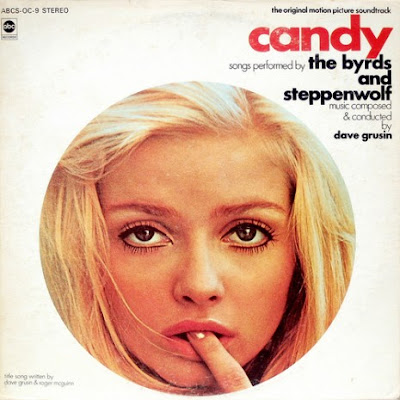 Candy should, I repeat should be off the scale incredible. But it’s not.

Candy was a film that was always talked about, but no one ever saw it. The poster of Candy topless in the airplane cockpit would always be for sale in the back pages of magazines like “Famous Monsters of Filmland” next to ones of King Kong and Frankenstein and it became a familiar image of the era. But the movie you never saw. Not on any late night movie show, never on a Sunday morning “Million Dollar Movie” or anything like that, Candy was seemingly banned from TV for being too racy and for whatever reason was never released on VHS either. Nor was it ever on HBO or Showtime. It was the great lost movie in my eyes.

I became mildly obsessed with this film I could never see and went about collecting movie posters, lobby cards, publicity photos and I own several different versions of the novel by Terry Southern and Mason Hoffenberg with different groovy covers. The mythical Candy became a cult movie Holy Grail for me. I really built it up in my mind. For years I tried to get hold of a copy in the tape trading underground, but the best I was ever able to find was still unwatchable. Then finally it came out on DVD. It was like Christmas had arrived.

But it sucked! Really sucked. It was such a let down!

Let’s not forget the amazing opening space travel sequence by Douglas Trumbull who went on to make 2001 with Stanley Kubrick. And the soundtrack by The Byrds, Steppenwolf and soundtrack great Dave Grusin (it’s INCREDIBLE and easy to find on audio blogs). The script was even adapted by Southern and Hoffman with Buck Henry. HOW could this fail?

It even featured the decade defining pulchritude of Miss Teen Sweden, Ewa Aulin, in the title role of Candy Christian.

But despite all this Candy is a terrible film and even worse, it’s boring.

One of the things that must have mucked up things badly for the production is—and I am just theorizing here—the contracts for the lead actors. These were THE leading actors of the day, all of them top drawer A-list 60s talent. After watching Candy the thought occurred to me that Marlon Brando’s agent probably asked how much screen time Richard Burton was getting and demanded the same for his client. Then James Coburn’s manager asked the same question and demanded equal time for his client and so on and so until each actor was guaranteed “Most Favored Nations” equal screen time. How else to explain the film’s structure? It’s maddening to watch and Candy feels like it’s never going to end.

STILL, I’m not saying it’s so bad you shouldn’t watch it. Actually I think that if this sounds even remotely intriguing to you then it’s definitely worth seeing. It’s not good, no, we’ve already established that fact, but it is a super insane, trippy, campy relic of the 1960s with some of the most iconic actors of the decade behaving like total hambones, each trying to outdo the other in chewing up the scenery.

Well I guess this movie it's very bad because I never hear or saw it in any cinema, newspaper or magazine.. and the plot doesn't really looks good.
Thanks anyway.