A riddle wrapped in... Harrah’s? 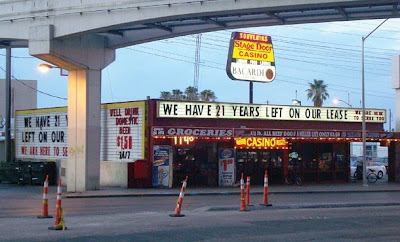 A riddle wrapped in... Harrah’s?
There may be great stories about the Stage Door, but good luck finding them
The building that time forgot: Have a beer and a dog at the Stage Door Casino, but don’t ask too many questions.
Steve Friess
Thu, Aug 6, 2009

The rule of thumb for marquees on the Strip is not to force anyone to think too hard. I challenge anyone to look up and down the Boulevard and spot much signage that stops you in your tracks in bafflement. Subtlety, thy name is not Vegas.

Which is why the Stage Door Casino has long fascinated me. To be honest, though, until last week I didn’t even know the place had a name, let alone something with such phony theatrical aspirations as the Stage Door.

I just knew it—as I suspect a whole lotta folks do—as that place on Flamingo across from the Bally’s Sports Book entrance with a sign that reads, “WE HAVE 21 YEARS LEFT ON OUR LEASE. WE ARE HERE TO SERVE YOU.”

The number changes each year, as you might expect. Huh, you wonder. Defiant! What’s that all about?

I suspected I knew. Must have something to do with all the development pressures in the area, some valiant holdout against the big, bad Harrah’s Entertainment, which owns so much land on the east side of the Strip.

That hunch seemed to be rewarded earlier this month when I stopped in at the video poker and sundries shop immediately east of Bill’s Gamblin’ Hall & Saloon and attached to the venerable Battista’s Hole in the Wall. When I asked a cashier if I could speak with the owner or manager, a portly, courtly fellow named Alan Hoffman emerged from his office with a warm handshake and a broad smile. He was effusive—“Oh, we’ve got stories to tell you!”—and even started gabbing with me about Harrah’s and its plans for neighborhood domination. Hoffman even pointed out that it was Harrah’s that was paying for the construction on Flamingo designed to bury the power lines east of Bill’s and the Flamingo Las Vegas. “They can’t build up without doing that,” he gossiped.

Except then something weird happened. Hoffman asked me to come back the following Wednesday to meet the owner, Ron Markin, “and we’ll tell you everything you ever wanted to know.” But when Wednesday arrived and I called up Hoffman to set a time for my return visit, his brio was gone.

“The owner wanted me to tell you we’ll have no comment,” he explained awkwardly. “Go read the InBusiness Las Vegas piece about us from a few years ago.”

“But last week you were so excited to talk,” I said, confused.

“Well, I don’t know what to tell you,” Hoffman answered, also a bit confused, although I’m not sure about what. Then he hung up.

Hmm. That was weird. Up went my scandal antenna. Except that the usual tactics—court-record searches and Googling a variety of versions of “Ron Markin”—didn’t really yield much. The aforementioned InBusiness piece was written in 2007, back when the Vegas economy still had some life, and you were considered a loser if you weren’t at least drawing up some multibillion-dollar construction plan. Harrah’s had something in mind for the 350 acres it owns behind its east-Strip resorts from Harrah’s to Paris, and, perhaps, offered Markin some dough to give up his 24-hour bar and condoms/liquor/munchies shop. If Markin held off in pursuit of bigger riches, he’s probably feeling kinda stupid now.

Harrah’s bought the land and building that houses the Stage Door and Battista’s in 2005, taking over the operation of the delightful old-school Italian joint and continuing to lease space to the Stage Door. The telling part of that 2007 story was that even though the Stage Door has been in business for more than 30 years, UNLV historian Bill Thompson paid it the ultimate Vegas insult: “It’s meant nothing. I’m oblivious to it. It means nothing for our economy.” Harsh!

Amid this, I put out a Facebook query: Anyone know anything about this place called the Stage Door? One friend responded by introducing me via Facebook to Richard Gibson. He’s the executive chef of Battista’s. I called him up.

Gibson sees the Stage Door folks once a month when they turn in their rent check, which Battista’s collects for Harrah’s. As Gibson understands it, Harrah’s bought the land and the restaurant in 2005 and promised to keep it all open for at least two years, which has now become four years and counting. Thing was, Markin signed a deal with Battista’s for a three-year lease back in 1999 that allowed for nine three-year options. In other words, Markin has the legal right to stay here operating the Stage Door until, effectively, 2029.

What’s it like to be next to the Stage Door, I wondered. Gibson said the restaurant’s neighbor, never much to begin with, has gone downhill.

“My cooks won’t even drink over there anymore,” he said. “The place is a hole.” Ouch!

Next up, I wondered about Harrah’s take on the situation. Except Jan Jones, the vice president of anything and everything Harrah’s, was thrown by my question.

The little slot place and grocery next to Battista’s.

Well, you own it. And they have this huge marquee that’s clearly meant as a shot at Harrah’s. You haven’t seen it?

“I don’t usually come from that direction,” she said.

Do you have some plan to knock it down? Do anything with that land?

“We’ve made it clear that tearing down existing hotels and businesses and spending two to five years and billions of dollars building them again is not anything we’re going to be doing,” Jones said.

Okay. So let’s review. The place has no history to speak of. Its own neighbor says it’s gross. Its landlord barely notices it exists. And yet its owners are afraid to talk to a columnist.

So what’s the place like? Well, I’m seated right now at one of the two bars writing this very column. It’s a Sunday-evening crowd, maybe 15 patrons swilling beers and playing video poker. I only had $3 in my wallet, but that was enough for the $2.50 beer-and-hot dog deal.

Excellent dog, actually. There are lots of tattoos and blinking lights in here.

Oh, and just now the owner reached out to me. Sort of.

The chesty bartender just told me that I couldn’t have my MacBook on the bartop video poker machine before me. Seeing how there are more than 20 vacant machines, I was baffled.

“Is someone going to arrest me?” I responded, in a kidding tone.

(Really. I was already moving my laptop off of the video poker screen.)

“The owner just called,” she said.

“Yeah, he watches through the cameras.”

Huh. That’s fun. Did he also notice that I ate my hot dog with a delicious side order of cigarette-smoke clouds floating my way from other patrons as well as said chesty bartender herself, in clear violation of the laws that prohibit smoking in places where food is served? And how old is that guy at the end of the bar swilling a beer?

At this rate, Harrah’s may get its “out” from that ironclad lease sooner than it thinks. Send in some Gaming Control folks or Health District folks.

That is, if anyone at Harrah’s cares. Which, evidently, they don’t. And that means the people at the Stage Door are wasting incredibly valuable marquee space waging a fight with an opponent that doesn’t even acknowledge their existence. But apparently it works for them.
Posted by Robalini at Friday, August 14, 2009

I recently came accross your blog and have been reading along. I thought I would leave my first comment. I dont know what to say except that I have enjoyed reading. Nice blog. I will keep visiting this blog very often.