'Back To The Future' Cast Recall Hoverboards And Kisses 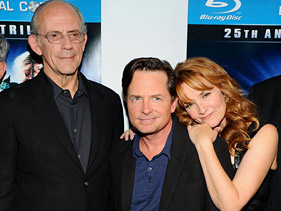 Michael J. Fox was working in England in the summer of 1985 when "Back to the Future" hit theaters. Friends would call to tell him that the time-travel flick was shaping up to be the biggest film of the year, but the actor couldn't really wrap his head around the idea until he returned to the States.

"I came back, and it was a different world," Fox told MTV News.

That different world was on full display Monday night, as media, fans and the film's stars gathered in New York to celebrate both the 25th anniversary of "Back to the Future" and the two sequels the original spawned. All three movies have become part of the pop-culture lexicon, from quotable lines about DeLoreans and Calvin Klein to futuristic doodads like self-lacing Nikes and machines that instantly hydrate pizza.

"The thing that people ask me about more than anything else is the hoverboard," Fox said, referring to a levitating toy he rides in "BTTF II." "People want to know where they can get a hoverboard. I don't know. I wish I had a hoverboard because I was hanging from cranes and swung through the courtyard, dangling like a puppet and a hoverboard stapled to my feet."

Wherever they go, it seems, the stars and filmmakers are asked about the trilogy. Star Christopher Lloyd, who played wild-eyed scientist Doc Brown, finds people quoting back his iconic lines like, "Great Scott!" and, "Roads? Where we're going we don't need roads."

Franchise co-writer Bob Gale gets the "Roads" quote a lot too. Director Bob Zemeckis' favorite line comes from Lea Thompson's character, Lorraine: "When I'm kissing you, it's like I'm kissing my brother."

Thompson, meanwhile, gets this gem, delivered by Lorraine about the kid, Fox's Marty McFly, she doesn't know is actually her son: "He's an absolute dream."
Posted by Robalini at Friday, October 29, 2010

Email ThisBlogThis!Share to TwitterShare to FacebookShare to Pinterest
Labels: Back to the Future, Michael J. Fox

AWESOME!!!! Did you know that Eric Stolz was originally filmed as Marty McFly, but then halfway through filming, Rob Zemeckis said "This isn't working" and told Steven Spielberg that he wanted to re-cast with Michael J. Fox.

Yeah, I knew that. I wonder how good Michael J. Fox would be as a bathrobe wearing heroin dealer to mob hitmen with a fetish for breakfast cereals.

BTW, I think you're the guy who got me to appreciate the BTTF movie series...