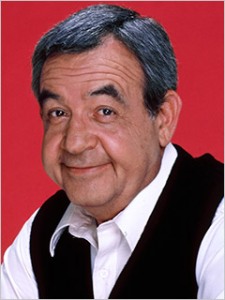 It’s not easy to play warm-and-cuddly and smart-and-funny, but Tom Bosley, who has died at age 83, managed to do it. As Howard Cunningham in Happy Days, Bosley was a model TV parent: patient, occasionally wise, sometimes exasperated, yet blissfully ordinary. It’s not easy making “ordinary” interesting, but Bosley managed to do that, too.

Bosley died of lung cancer in his home in Palm Springs, Calif.

The most modest and charming of actors, Bosley was happy on Happy Days to be part of the ensemble, working with crack timing alongside costars Marion Ross, Ron Howard, and Henry Winkler. But Bosley had a varied career. He won a Tony for his portrayal of the flamboyant New York City mayor Fiorello LaGuardia in 1959's Fiorello! He appeared in small roles in many ’50s and ’60s TV shows and movies before finding permanent pop culture resonance as Mr. C on Happy Days (1974-84).

Bosley also used his warm voice in numerous commercials and cartoons such as the Rankin-Bass Christmas special The Stingiest Man in Town. He was Sheriff Amos Tupper in Murder, She Wrote, and played the title role on The Father Dowling Mysteries.

The key to Bosley’s endurance could be seen on his face. With his wide smile and crinkly eyes, he managed to come across as a decent man, never a rube or a sucker. He had the sort of sincerity that never goes out of style even as it became increasingly rare. When you compare him to Winkler’s Fonzie — a breakout character designed to be larger-than-life — Howard Cunningham was a model of small-scale realism, a pure and subtle television creation.
Posted by Robalini at Thursday, October 21, 2010