Goodbye Walkman, thanks for the iPod 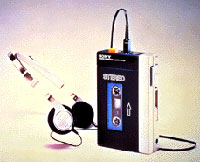 October 25, 2010
Goodbye Walkman, thanks for the iPod
Greg Sandoval

Sony has announced it has finally retired the Walkman cassette tape player, marking the end of one of the most successful consumer gadgets of all time.

At least it outlived disco.

By today's standards, the Walkman was clunky. The plastic tape player required frequent replacing of two AA batteries. There was no shuffle. There was no storage to speak of. It could play only the number of songs on the tape. Jumping to a new song tasked an owner with fast-forwarding, an inexact process that meant repeated stops to find the start of the desired tune.

But until July 1, 1979, the day the Walkman went on sale in Japan, people had no concept of portable music--not the kind that Sony offered. Until that day, portable music mostly meant holding a transistor radio up to your ear.

Count Steve Jobs among the most impressed, according to John Sculley, Apple's former CEO.

"We used to go visit [Sony founder] Akio Morita and he had really the same kind of high-end standards that Steve did and respect for beautiful products," Sculley said in an excellent interview with Leander Kahney of the Cult of Mac blog. "I remember Akio Morita gave Steve and me each one of the first Sony Walkmans. None of us had ever seen anything like that before because there had never been a product like that...Steve was fascinated by it. The first thing he did with his was take it apart and he looked at every single part. How the fit and finish was done, how it was built."

So, the Walkman's designers likely influenced the eventual concept for the iPod. And what about the Walkman's branding? After the music player became a hit, Sony tried to capitalize by releasing such products as Pressman, Watchman, Scoopman, Discman, and the Walkman MP3 player--which will soldier on. Now, think iPod, iPhone, and iPad.

Of course, Jobs took portable music to a new level, one where even Morita's company couldn't compete. Jobs wrapped his offering around a cohesive and as yet unbeatable combination of hardware, software, and digital retail. Sony knew hardware but was at best so-so in retail and a total disaster at developing software (see Sony Connect).

Some have speculated that Sony's failure to keep up in a segment that the company created was one of the reasons it has given the Walkman such a quiet send off.

Still, the company should be proud. It's unlikely we would have had the iPod without the Walkman and Morita, who helped set music free.

For that, we owe the device and the man a deep and respectful bow.

Greg Sandoval covers media and digital entertainment for CNET News. He is a former reporter for The Washington Post and the Los Angeles Times. E-mail Greg, or follow him on Twitter at @sandoCNET.
Posted by Robalini at Friday, October 29, 2010