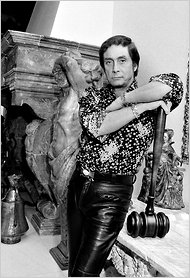 Bob Guccione, who founded Penthouse magazine in the 1960s and built a pornographic media empire that broke taboos, outraged the guardians of taste and made billions before drowning in a slough of bad investments and Internet competition, died Wednesday in Plano, Tex., The Associated Press reported. He was 79.

A statement issued by the Guccione family says he died Wednesday at Plano Specialty Hospital after a long battle with cancer, The A.P. said.

It began in London in 1965 with a bank loan, an idea and an accident. The loan was for $1,170. The idea was a new magazine with nude photos to outdo Hugh Hefner’s Playboy. And the accident was an old mailing list, so that promotional brochures with pornographic samples went out to clergymen, schoolgirls, old-age pensioners and wives of members of Parliament.

The outcry was huge. And there was a $264 fine for mailing indecent materials. But all 120,000 copies of the first issue of Penthouse sold out in days, and Mr. Guccione, a struggling artist from New Jersey who had been knocking around Europe for more than a decade, was on his way to being a tycoon.

By the early 1980s he was one of America’s richest men, king of a $300 million publishing empire, General Media, which owned Penthouse, with a monthly circulation of 4.7 million in 16 countries, and 15 other magazines, including Omni and Penthouse Forum as well as titles on bodybuilding, photography and computers, in addition to book, video and merchandising divisions.

Mr. Guccione looked the part of the libidinous pornographer. He was tanned and muscled, and he wore slim pants and silk shirts open to the waist, showing gold chains on a hairy chest. His personality was volatile, but he did not drink, smoke or use drugs.

“He was a mass of contradictions, engendering fierce loyalty and equally fierce contempt,” Patricia Bosworth, who had been executive editor of Mr. Guccione’s Viva magazine in the 1970s, wrote in Vanity Fair in 2005. “He hired and fired people, then rehired them. He could be warm and funny one minute and cold and detached the next.”

Robert Charles Joseph Edward Sabatini Guccione was born in Brooklyn on Dec. 17, 1930, the son of Anthony and Nina Guccione. He was raised Roman Catholic in Bergenfield, N.J., and said he considered the priesthood, but decided to be an artist. In 1948 he graduated from Blair Academy, in Blairstown, N.J. At 18 he married the first of his three wives, Lilyann Becker, and had a daughter, Tonia. The marriage soon failed.

Over the next 12 years he traveled in Europe and North Africa, sketching tourists in cafes and working odd jobs. In Tangier he met Muriel Hudson, an English singer. They traveled together for several years, were married in 1955 and had four children: Bob Jr., Nina, Anthony and Nick.

In 1960 they settled in London, where he ran a dry-cleaning business, drew cartoons for a syndicate and edited a small newspaper. A mail-order business, selling back issues of men’s magazines, put him deep in debt, and his wife left him, taking the children. But Penthouse transformed his life.

With Kathy Keeton, a dancer from South Africa who was his girlfriend, his business partner and later his wife, Mr. Guccione challenged Playboy at the height of the sexual revolution, introducing Penthouse in the United States in 1969 and building it into one of the nation’s most successful magazines, a mix of what was billed as “sex, politics and protest” that took in an estimated $3.5 billion to $4 billion over 30 years.

Its images of women, often shot by Mr. Guccione, left little to the imagination. Compared with Playboy Playmates, as the Hefner centerfold models were known, Penthouse Pets were arrayed in more provocative poses. The magazine infuriated feminists and conservatives, but others praised it for breaking taboos.

Penthouse occasionally ran nude layouts of well-known women, including Madonna. In 1984, sexually explicit photos of Vanessa Williams, taken two years before she became the first black Miss America, appeared in Penthouse. Ms. Williams lost her crown and sued for $500 million, but the suit was dropped and Penthouse reported a $14 million newsstand windfall.

Other Guccione magazines made splashes: Viva, featuring male nudes for female browsers, folded in 1978 after five years; Omni, a science and science fiction offering, began in 1978 and ended in 1995. Mr. Guccione employed his children and father in his enterprises.

The dissolution of the Guccione empire took years. A $200 million Penthouse casino in Atlantic City never materialized, and he lost much of his investment. A $17.5 million movie containing hard-core sex scenes and graphic violence, “Caligula,” was shunned by distributors, and Mr. Guccione lost heavily. He once hired 82 scientists to develop a small nuclear reactor as a low-cost energy source, but it came to nothing and cost $17 million.

The government took chunks of his fortune. In 1985, the Internal Revenue Service demanded $45 million in back taxes. In 1992, he had to borrow $80 million for another tax bill. In 1986, after a scathing federal antipornography report, Penthouse was withdrawn from many newsstands and circulation revenues — a major source of income — fell sharply.

The trend accelerated in the 1990s as Internet pornography grew increasingly available. Mr. Guccione responded with more explicit sexual content that drove advertisers and vendors away, limiting many sales to pornographic bookstores. Ms. Keeton, the president and chief operating officer, died in 1997, and friends said her loss had profound effects on Mr. Guccione’s business and personal life.

Mr. Guccione, who developed throat cancer in 1998, sold artworks, media properties and his Staatsburg estate as revenues dwindled and debts soared. Penthouse posted a $10 million loss in 2001, General Media filed for bankruptcy in 2003, and he resigned as chairman and chief executive of Penthouse International. Creditors foreclosed on the Guccione mansion, and he moved out in 2006.

Dozens of items from the town house — fireplace mantels, marble columns, even a circular staircase — were auctioned off by a Connecticut gallery in 2009 for a fraction of their presale estimates, with the proceeds going to a charity.

“Kind of gaudy,” said Dave Kerr, a prospective buyer looking skeptically over the lot. “It wouldn’t work in our house. I guess he lived a different lifestyle.”

A list of survivors was not immediately available.
Posted by Robalini at Wednesday, October 27, 2010