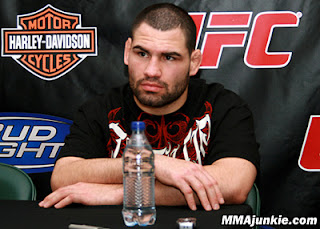 In fact, he'd like to keep fighting where he feels closest to his people: Southern California, Arizona, and of course, Mexico.

Velasquez shook the roof of the Honda Center in Anaheim, Calif., when he took Brock Lesnar's belt in 4 minutes and 12 seconds Saturday night at UFC 121, and from early indications of the stir he created in the Hispanic community, it could mean big things for the UFC's push into the Latino market.

Many MMA pundits expected Lesnar (5-2 MMA, 4-2 UFC) to dominate the headlining fight with a 20-pound size advantage and superior amateur wrestling credentials. But those paper advantages proved to be little protection for Velasquez's striking. After an initial bull-rush and takedown failed to keep the challenger at bay, Lesnar withered under a relentless ground and pound attack.

The heavily pro-Velasquez crowd erupted in an ear-splitting frenzy when referee Herb Dean waved off the bout after ample punishment had been distributed.

"We knew his game plan going in, and it kind of surprised me how hard he did go for it in the beginning," said Velasquez of the fight's opening moments. "I kind of froze just a little bit. I wasn't as relaxed as I should have been, but I think after that takedown he got on me, that's when I was like, 'OK, relax.'"

After admittedly getting away from his own gameplan by trading wild shots with the champion, Velasquez had to again remind himself to relax when Lesnar went down for the first time.

"I knew the ref wasn't going to stop it that early," Velasquez said. "So we had to pick our shots. I wasn't just going to go crazy [with] punches if he was on bottom.

"He was covering up well. I wanted some punches to connect, and some elbows to get in there, so I took my time and really thought about where I should throw the punches and where I should give the elbows."

Of the much-hyped size difference, Velasquez said it was a non-issue when the two first locked up.

"I felt his strength, and I felt his power, and I was definitely used to competing with guys that were just as strong as him," he said. "I just think I was well-prepared for this fight."

UFC president Dana White said the UFC's push to promote Velasquez in the Latino community was a huge success, though he wasn't sure whether the new champion's victory would advance the promotion's goals in Latin America.

Velasquez, however, thinks a surge is already underway.

Velasquez said he'd now like to take some time off with his family before attacking his next challenge, an expected meeting with Brazilian Junior Dos Santos.

"I have to be a much better fighter," he said. "I have to keep evolving. I think [Dos Santos is] the best standup fighter that there is as far as heavyweight, so he's extremely tough.

"He has great takedown defense. He gets right back up if you take him down. He's really relaxed in his boxing, so I definitely have my work cut out for me."
Posted by Robalini at Thursday, October 28, 2010