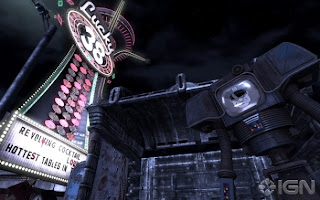 Pros: Surprisingly strong story; faction system adds replay value; lots of major and minor improvements to the Fallout formula; Hardcore mode lives up to its name.
Cons: So many bugs; would be nice to sort inventory by item weight.

Fallout: New Vegas is buggy. That's not really open for debate, as the Internet is currently abuzz with complaints from players, and videos of weird stuff happening. Over the course of my 80-something hours with the game, I experienced a wide variety of bugs, from the completely innocuous (landscape textures popping into focus late) to the completely infuriating (the game straight-up crashed three or four times, mostly during loading screens), yet I soldiered on. I kept coming back no matter what was thrown at me, and it wasn't because I had to play the game for work (I did) or because I'm a glutton for punishment (I'm not).

No, I fought through the bugs for one simple reason: New Vegas is one of the best games of the year.

It's not like Fallout: New Vegas is a groundbreaking game or anything, as it certainly looks and feels almost identical to its predecessor, the almost-universally-loved Fallout 3. What developer Obsidian succeeds in doing, however, is improving on Bethesda's tried-and-true first-person role-playing in myriad ways, resulting in some of the most purely distilled RPG action in years.

New Vegas kicked off just outside the titular burg with my character's apparent murder by the hands of a Rat Packian tough guy, but I was soon revived by a good ol' doctor out in the sticks. After a quick and painless character creation process in which I chose my base traits, skills, and personality (via an old-timey strength machine and Rorschach tests), I was on my way into the Wasteland. I expected a fairly standard revenge tale, so I was pleasantly surprised to find that New Vegas' story is a sprawling, tightly written epic that some players (including myself) might be inclined to play multiple times. This is no small praise for a game that takes dozens of hours to beat, but the new faction system changes the mission structure so much that it's literally impossible to see everything on a single playthrough.

Fallout: New Vegas' entire world is populated with characters that have some sort of opinion of you, depending on the actions you take for or against them. It's a pretty simple system at first glance, but it wasn't long before I found myself juggling quests in an effort to make everyone happy -- a thoroughly impossible feat (I actually felt bad when I inadvertently let down one of the factions I desperately wanted to like me). The faction system is the biggest reason I wanted to start playing the game again soon after finishing, as the game's numerous endings depended on my choices. That, more than anything, is the biggest change from previous Bethesda games like Fallout 3 or The Elder Scrolls IV: Oblivion: I now have a reason to go back to those key decisions and see where the branching road takes me.

Of course, it's not like you can't keep yourself busy with plenty of great side quests if you want to sink triple-digit hours into a single playthrough. Actually, I don't even think that they can be called side quests, as nearly everything I did affected my standing with one faction or another, sometimes without my even realizing it. Learning that I failed a quest before I'd even received it occasionally gave me the impetus to reload to a previous save just to make different choices -- the video game equivalent of keeping my thumb at a previous choice in a Choose Your Own Adventure book.

While the faction system shakes the game to its very foundation, dozens of smaller changes improve upon Fallout 3 in less-obvious ways. As a huge fan of the alchemy system in Bethesda's own Oblivion, I was happy to see a similar mechanic in New Vegas, allowing me to mix powerful "potions" from the plants I found during my travels. The new crafting system, which let me reload my own bullets or break ammo I didn't need into its composite parts, is sure to interest wannabe survivalists -- especially those that want to see if they've really got what it takes to make a living as a Wasteland wanderer. Thanks to the brutally awesome (or awesomely brutal?) new Hardcore mode, those folks can finally find out.

Hardcore mode lives up to its name in more ways than one, and it's sure to be the reason that some players will come back for a second or third go-round with New Vegas. I've put nearly 20 hours into Hardcore mode so far, and I'm amazed at just how authentic it feels. Having to worry about dehydration or sleep deprivation may not sound like much fun, but it's great fun to immerse yourself so completely in the game's world. My Hardcore character could best be described as a prospector, using his survival and bartering skills to eke out a life in one of gaming's harshest environments.

Ultimately, whether or not you enjoy Fallout: New Vegas depends on your tolerance for handling bugs. Personally, I didn't find them distracting enough to ruin the experience for me, and a few crashes over the course of 80+ hours felt like a small price to pay for one of my favorite games of the year. Some players will get fed up more quickly than others, just as I'm sure some won't care a whit about glitchy A.I. or weird textures problems. If you can see the forest for the buggy trees, you'll quickly see that Fallout: New Vegas is the pinnacle of the first-person RPG genre.
Posted by Robalini at Friday, October 29, 2010

Email ThisBlogThis!Share to TwitterShare to FacebookShare to Pinterest
Labels: Fallout