Barbara Billingsley of 'Leave it to Beaver' fame dies 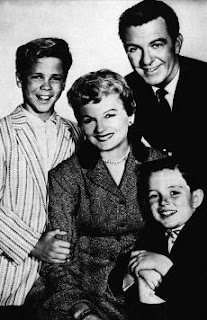 (CNN) -- Barbara Billingsley, who wore a classy pearl necklace and dispensed pearls of wisdom as America's quintessential mom on "Leave it to Beaver," has died at age 94, a family spokeswoman said Saturday.

The actress passed away at 2 a.m. (5 a.m. ET) Saturday at her home in Santa Monica, California, after a long illness, spokeswoman Judy Twersky said. A private memorial is being planned.

"Barbara was a patient advisor and teacher. She helped me along this challenging journey through life by showing me the importance of manners, and respect for others," Mathers said in a statement. "She will be missed by all of her family, friends, fans and most especially by me."

"She was as happy as a lark being recognized as America's mom," Dow told CNN's Don Lemon. "She had a terrific life and had a wonderful impact on everybody she knew, and even people she didn't know."

The actress won a new legion of fans in a brief, but memorable, scene in the 1980 send-up movie "Airplane."

"Oh, stewardess. I speak jive," Billingsley said in her role -- much different from her June Cleaver persona -- as an elderly passenger comforting an ill man on the flight. She, the sick man and his seat companion engaged in street-slang banter.

From the moment its catchy theme song sounded in black-and-white TV sets of the 1950s, "Leave it to Beaver" enthralled Americans during a time of relative prosperity and world peace. Its characters represented middle-class white America.

June Cleaver dutifully pecked the cheek of her husband, Ward (played by the late Hugh Beaumont), when he came home to learn about the latest foibles -- nothing serious -- committed by Beaver and Wally.

"Ward, I'm very worried about the Beaver," was a common refrain.

The parents would dispense moralistic advice to their sons. The boys' friends included Lumpy and the obsequious Eddie Haskell, who avoided trouble and often buttered up Ward and June.

Perhaps fittingly, "Leave it to Beaver" was canceled in 1963 on the eve of the JFK assassination, the Vietnam War and the tumult of the 1960s.

In the 1980s, Dow appeared with Billingsley in "The New Leave it to Beaver." She shifted from being a mom figure to a good friend who supported his directing and artistic endeavors, Dow said.

Mathers spoke of Billingsley's talent during a 2000 appearance on CNN's "Larry King Live."

"We kind of stifled her, because her true talent didn't really come out in 'Leave it Beaver.' She was like the straight man, but she has an awful lot of talent."

She was under contract to MGM in 1945 before becoming a household name with the launch of "Leave it to Beaver" in 1957.

Billingsley also voiced the role of Nanny in Nickelodeon's "Muppet Babies" from 1984 to 1991.

Billingsley is related by marriage to actor/producer Peter Billingsley, known for his starring role as Ralphie in the seasonal TV-movie classic "A Christmas Story," according to the Internet Movie Database. Peter Billingsley's mother, Gail Billingsley, is the cousin of Barbara's first husband, Glenn.

Asked once to compare real-life families to TV families, Billingsley responded, "I just wish that we could have more families like those. Family is so important, and I just don't think we have enough people staying home with their babies and their children."
Posted by Robalini at Thursday, October 21, 2010

Email ThisBlogThis!Share to TwitterShare to FacebookShare to Pinterest
Labels: Leave It to Beaver