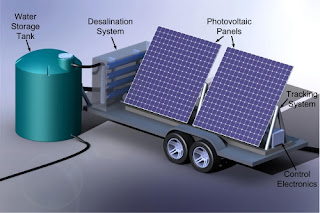 About one in eight humans do not have access to clean drinking water, according to the World Health Organization. That's approximately 884 million people.

The repercussion of this reality are a daily reality in developing nations: an estimated 1.4 million children perish each year due to diarrhea brought on by waterborne bacteria. In spite of breathtaking advances in human technology, over 97 percent of the world's water is still undrinkable.

This full-scale rendering may represent the future of clean water for those who have none.

And while salty or impure water can be cleaned through existing water desalination technologies, the facilities needed are massive and consume vast amounts of energy. It's costly, too: purifying sea water can cost "over $1,000 per acre-foot," according to the US Geological Survey. Even worse, of the roughly 12,500 desalination plants operating as of 2002, their combined total output was equal to less than 1 percent of humanity's daily water consumption.

All of these factors combine to effectively place clean water out of reach for most of the world's poor.

Enter the Massachusetts Institute of Technology (MIT) Field and Space Robotics Laboratory, which has developed and successfully tested a portable, solar-powered water desalination system that has the potential to save millions of lives the world over.

Under the guidance of Profs. Steven Dubowsky and Richard Wiesman, the group created a small, reverse-osmosis system that's capable of producing up to 80 gallons of clean water per day. A scaled-up version of the system could produce up to 1,000 gallons per day, according to David Gabriel, writing for the Environmental News Network.

One of the military's C-130 cargo planes could theoretically carry up to 24 of these systems, Gabriel noted. With 24,000 gallons of clean water per day, that's enough to sustain a population of approximately 10,000.

"The system is designed to be cost effective," he explained. "It is made from standard parts such as PVC pipe and basic electronic components. It can be assembled and operated by local people who do not need advanced technical training. The units can also operate efficiently in a wide range of weather conditions. They have built in computers with sensors that can change certain variables if it gets cloudy. For example, the computer can adjust power going to the pump or the position of the valves to ensure the system will always produce water."
Posted by Robalini at Thursday, October 21, 2010