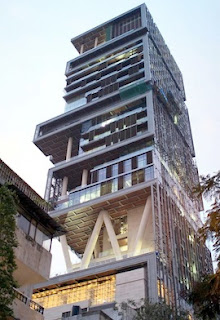 Marking the end of seven years of construction work, India's richest man is planning a housewarming party for his 27-story palatial new home in Mumbai, replete with no fewer than three helipads and an air-traffic control station on its roof.

The 570-foot-tall glass tower, called Antilia, "features a swimming pool, a health club, a salon and a mini-theatre," reports the Times of India. "The first six levels comprise the garage where more than 160 cars can be parked. Atop the parking lot is Antilia's lobby, which has nine elevators." The house also has a garden that can accommodate trees, according to the Telegraph, and a separate ballroom. About 600 staffers will be required to run Antilia, named after the mythical island in the Atlantic.

The house belongs to Mukesh Ambani, who owns much of the oil and retail giant Reliance Industries. He is estimated to be worth about $27 billion. Experts told the Guardian that "there is no other private property of comparable size and prominence in the world." Ambani, the fourth-richest man in the world, co-ran Reliance with his brother before the two had a falling-out and split the company.

Some were surprised at the conspicuous show of wealth, since Ambani is known as a deeply private person not fond of hanging out with India's super-rich. "Perhaps he has been stung by his portrayal in the media as an introvert. Maybe he is making the point that he is a tycoon in his own right," Hamish McDonald, author of the book "Ambani and Sons," speculated in the Guardian.

In a 2008 New York Times profile, friends described the tycoon as something of a contradiction: a cold-blooded businessman whose heart also "bleeds for India." He wants to help pave the way for a better life for the country's poor, they said. A Reliance spokesman told the Times the house would cost about $70 million, but the Guardian says it's closer to $1 billion.
Posted by Robalini at Tuesday, October 19, 2010

Email ThisBlogThis!Share to TwitterShare to FacebookShare to Pinterest
Labels: India