10 Things You Didn’t Know About The Empire Strikes Back 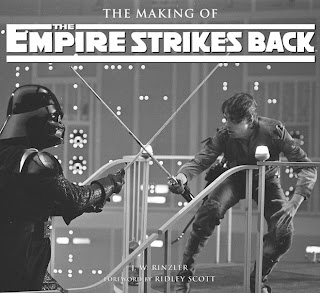 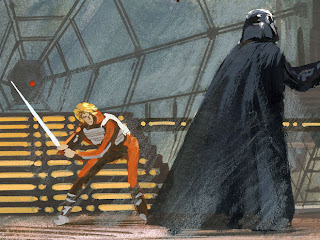 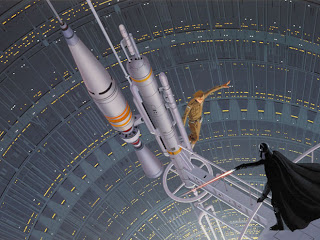 Here’s a slightly different version of the battle between Luke Skywalker and Darth Vader at the end of Star Wars: The Empire Strikes Back. It’s just one of many revelations in a new making-of book.

The Making of Star Wars: The Empire Strikes Back by J.W. Rinzler comes out today, and it’s not just essential for fans of the classic film. It’s also a must-read for anybody who’s interested in the creative process, because it goes into excruciating detail, on a day-to-day basis, on the troubled genesis of an amazing film.

You get inside the heads of everybody involved with it, and you see how much pain went into every frame of this movie. In particular, there’s a 17-page section in which you get a transcript of director Irvin Kershner and the actors — especially Harrison Ford — agonize over every second of the crucial carbonite freezing chamber scene, trying to get as much emotional truth and reality out of it as possible. This was on set, after the screenplay had already been revised several times, and every moment of that sequence gets rehashed and debated until it’s (arguably) perfect. There’s tons and tons of eye-popping concept art, including tons of versions of the Luke/Vader fight.

What Rinzler’s book drives home is that Empire Strikes Back was as groundbreaking and daring, in its own way, as the original Star Wars. The film went way over schedule and massively over budget, and almost ran out of money a bunch of times. Everybody became sick on set, Mark Hamill broke his thumb doing one stunt, and there was an accident with the bacta tank that could have killed Hamill if he’d been inside. Also, the movie’s second unit director and its first screenwriter both died during the process.

You see how George Lucas put together ESB at the same time that he was building his business empire, including Lucasfilm and the more mature version of Industrial Light & Magic. Lucas was creating his team and fighting for creative freedom, even as he was stepping back from writing and directing — and a big part of this movie’s brilliance stems from Lucas’ drive to finance the film himself, keeping 20th Century Fox out of the loop creatively. (And if Empire had failed, Lucas would have been broke, despite the first film’s huge profits.)

What comes through, in every interview and behind-the-scenes detail, is the determination of everyone involved to make The Empire Strikes Back bigger and better than the original Star Wars. In spite of huge, almost insurmountable difficulties, the determination to create something better comes through clearly.

In addition to the concept art, there are also a ton of set photos, including things like a cast being made of Harrison Ford for the “frozen in carbonite” Han Solo, and Darth Vader and Boba Fett out for a stroll. And there are tons and tons of pieces of script pages and scribbled notes. You get a real sense of what it would have been like to be inside this madhouse of creativity and seat-of-the-pants improvisation. More concept art shows the evolution of the tauntaun, which started out as a kind of weird lizard. 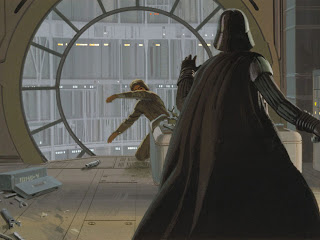 10 Things You Probably Didn’t Know About Star Wars: The Empire Strikes Back 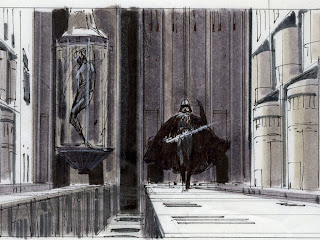 1. Yoda was originally named Buffy. No, really. In Lucas’ earliest outlines for the sequel, Luke meets a supernatural entity named Buffy, or Bunden Debannen. Here’s how Lucas described it:

And Lucas concludes by saying Luke will become the chosen one, “the human Buffy.” In later drafts, he thought of Yoda as a kind of small frog, and Yoda had a full name: Minch Yoda.

In the earliest script draft, Minch has the immortal line: “Skywalker. Skywalker. And why do you come to walk my sky, with the sword of a Jedi knight?… I remember another Skywalker.”

2. Lucas considered having a scene where Luke’s face gets injured. Mark Hamill was injured in a car accident in 1977, and his face had to be reconstructed — so for a while, Lucas planned on including a sequence where Luke’s face is damaged, and we see it getting patched up by a droid. This got as far as filming — there’s a set picture showing the droid bandaging Luke’s face — but was cut out of the movie. 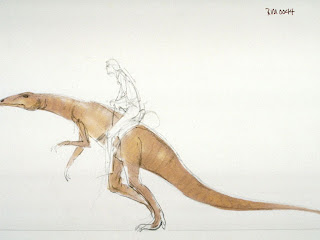 3. Luke’s journey to becoming a Jedi Knight would have had a lot more bumps. One idea that got tossed around a lot in the early stages of planning ESB was the notion that Luke’s lightsaber had a crystal hidden in the hilt, with secret encrypted information on it — including the coordinates of Minch Yoda’s planet. And Luke would have been “humiliated” when he couldn’t use the Force to stop an attack by a bunch of ice monsters on the rebel’s Hoth base. (With Han telling Luke, “You’re not a Jedi knight, and you never will be.”) Meanwhile, Darth Vader senses that Luke used the force to destroy the Death Star and there’s a new wannabe Jedi in town — so Vader uses telepathy to choke Luke in his spacecraft, nearly killing him — except that R2-D2 jumps the ship into hyperspace and takes it to Yoda’s planet.

4. We could have visited other planets. Possibly including a “water planet,” with an underwater city, and a “city planet,” with the whole planet built over. And at one point, Lucas considered having a visit to the Wookiee home world (some of which ended up in the Christmas special), and Ralph McQuarrie did some concept art of a young Chewbacca. (Also, Lando Calrissian’s home would have been the planet Hoth — not the ice world, but another planet named Hoth — and there might have been a whole alien race living there. And in one early draft, Lando was a clone warrior, one of the many clans of clone fighters left over from the wars.) 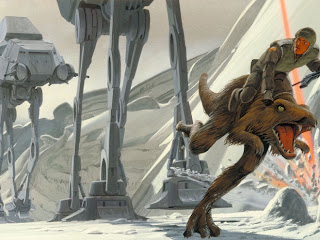 5. Darth Vader would have had a castle. And it would have been an evil fortress — in some versions, it’s surrounded by lava, and full of gargoyles who are Vader’s pets.

6. Vader wasn’t Luke’s father at first. In Leigh Brackett’s first script draft, Luke meets his real dad, who says he sent away Luke and his secret sister for their own safety. (Luke’s sister has been training to be a Jedi knight in secret, just as Luke has.) And Papa Skywalker administers the oath of a Jedi Knight to Luke, in which Ben, Minch, Anakin and Luke cross lightsabers, and Luke swears to “dedicate my life to the cause of freedom and justice.” 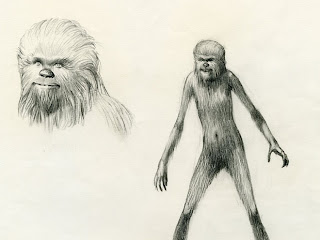 7. The Luke-Leia-Han love triangle is a much bigger deal in earlier drafts of the script. It’s at the root of Luke’s struggles for self-respect and his humiliations. When Darth Vader is trying to win Luke over to the Dark Side in the second draft, written by Lucas himself, Vader says, “You’re in love with Leia. You don’t want to lose her to Han Solo…. But you will, if you lack the courage to use the strength that’s in you. A strength as great as mine, Luke.” And then at the end, Leia flat-out tells Luke that he’s not the one she loves, because she’s into Han. Also in this version, Han doesn’t get frozen in carbonite — instead, he just flies off to take care of business, leaving Luke and Leia watching the Millennium Falcon disappear.

8. The film posed unique challenges for special effects and model work. Darth Vader had a new Star Destroyer, which was supposed to be 16 miles long! And they built a full-size Millennium Falcon, which was 65 feet wide and 80 feet long. Also, ILM had to start a new stop-motion animation department just to make the Imperial Walkers and tauntauns work. (They tried a man-in-a-suit tauntaun, with “hilarious if not film-worthy results.”) And then there’s the challenge of Yoda — as we reported the other day, they considered everything from a monkey in a mask to a small child or little person to play the Jedi sage, before deciding to go with Frank Oz’s puppetry. 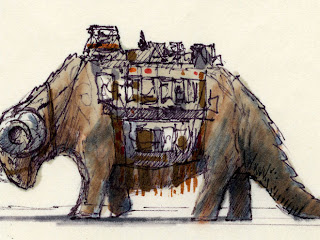 9. Stanley Kubrick nearly killed the movie. Empire was sharing studio space with The Shining, and there was a huge fire that burned down Stage 3 at Elstree Studios, destroying The Shining’s sets. That meant that Empire had to give up some of its own studio space, and The Shining went way over schedule, especially as Kubrick used the delay as an excuse to rethink his own movie. “Timewise, it is doubtful the picture will recover,” one crewmember wrote at the time.

10. Miss Piggy had a cameo in one of Yoda’s first scenes in rehearsal. When Mark Hamill first met Frank Oz, he asked him to do a brief Miss Piggy cameo during rehearsals on set, as a practical joke — but when the time came much later, it caught even Hamill off-guard. During one scene, Yoda tells Luke to follow his feelings. Luke protests that he has followed his feelings — and suddenly, Frank Oz whips out a Miss Piggy puppet, saying, “Feelings? You want feelings? Get behind the couch and I’ll show you feelings, punk. What is this hole? I’ve been booked into dumps before, but never like this. Get me my agent on the phone!”

Send an email to Charlie Jane Anders, the author of this post, at charliejane@io9.com.