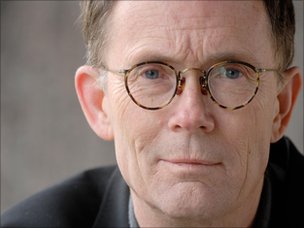 The rapid rate of technological and social change means the future comes crashing towards us faster than ever before, says visionary science fiction author William Gibson.

That stood in sharp contrast to late 2010, he said, when big changes had become a daily occurrence.

"Now the present is the length of a news cycle some days," he said in an interview with BBC News.

That ferocious rate of change made writing about the present day exciting, he said, and explained why his current novel, Zero History, is set around about now.

"The present is really of no width whatever," he said.

Given that, he said, it was becoming hard to use the tricks employed by earlier generations of science fiction writers, which involved extrapolating current technology trends to see where they would go.

Doing this with current technologies was impossible because real world events were likely to overtake anything a writer could conceive long before a book was finished and on the shop shelves.

For instance, he said, the flying drones depicted in Zero History and used for surveillance have the potential to inflict big changes very quickly once they become cheap and ubiquitous.

"They are actually going to change the landscapes of cities," he said.

"People in tall buildings, particularly in cities like New York or Chicago, have been living lives of utter privacy quite unconcerned that anyone might be looking in the window."

"That's just not going to be the case anymore," he said.

Realising how things were speeding up made Mr Gibson take a conscious decision to recalibrate what he described as his sense of "contemporary weirdness" that fuels his writing.

"By the time I had finished my sixth novel I had this nagging sense that my yardstick of contemporary weirdness was really an 80s yardstick," he said.

"There's a sense in which I need the formal official metric unit of contemporary weirdness in order to know how much I can successfully expand that and induce science fiction's characteristic cognitive dissonance in the reader.

"What I actually found was that this contemporary weirdness was incredibly expansive and the deeper I looked into it the weirder it got," he said.

Zero History is at face value a story about a search for the elusive maker of a coveted series of designer clothes. The book is also an exploration of the trends that shape contemporary society, how they can be manipulated and how people can fashion a life in the face of such rapid change.

"One of the economic units of this society is being 'in the know' or being able to convince people that you are 'in the know'," said Mr Gibson.

"My reading of these three recent books and to an extent the earlier books is that there is always the suggestion there that there's not actually a know and the whole thing may be kind of mutually agreed upon snake oil."

There was also another reason why setting a story in the present day is more attractive than looking into a future even half a century away. This was because, said Mr Gibson, using that setting would necessitate explaining away present-day problems such as global warming.

"If I write something set 60 years in the future I am going to have to explain how humanity got there and that's becoming quite a big job," he said.

"Compared to that further investigation of our alien present seems actually way more doable and it may be more fun to do because it shakes all sorts of people out of the woodwork that want to talk to me," he added.

The rapid pace of change of the present day could also spell curtains for the central idea of the three cyberpunk books, Neuromancer, Count Zero and Mona Lisa Overdrive, the "consensual hallucination" of cyberspace.

"Cyberspace is colonising what we used to think of as the real world," he said. "I think that our grandchildren will probably regard the distinction we make between what we call the real world and what they think of as simply the world as the quaintest and most incomprehensible thing about us."

"The prefix cyber is going the way of the prefix electro," he said.
Posted by Robalini at Tuesday, October 19, 2010