Marketer of the Decade: Apple 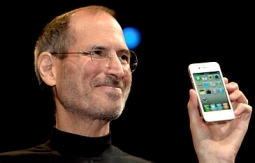 YORK, Pa. (AdAge.com) -- You think you have Apple fatigue. Apple has won Ad Age's Marketer of the Year title only once in the past decade, but it has been named runner-up several times and has been a contender almost every year in our heated behind-the-scenes discussions of who should next wear the marketing mantle.

This year was no different. Some staffers were passionate about Apple's inclusion, while others expressed weariness over its perennial powerhouse status. In the end, we all agreed that Apple deserved consideration for several reasons: the launch of both the iPad tablet and the iAd mobile ad platforms (and the industry impact both have had); the continued thriving sales and solid marketing behind Mac, iPhone and iPod; the successful retail-stores-as-marketing strategy; and the major crisis-management coup in skirting iPhone 4 "Antennagate."

Frankly, because this seems to happen every year, we decided to take Apple out of the running for Marketer of the Year and instead crown the tech whiz as Ad Age's first Marketer of the Decade.

It seems fitting: Apple kicked off the aughts in 2001 with the iPod, an electronic device that went on to disrupt and forever change the music industry; then mid-decade it dropped the iPhone, a mobile device that changed the mobile-phone industry and added the word "apps" to the English vocabulary; and finally, in 2010 it debuted the iPad, a computing device with the potential to disrupt the media, publishing, entertainment and computing industries.

Yes, it has been a golden decade for Apple. And while one can certainly argue that its influence has been overstated -- it is No. 56 on the list of Fortune 500 by revenue -- Apple's influence on business models across industries from music and computing to entertainment and advertising, along with its impact on popular culture, media and, of course, marketing, has been indelible.

It's almost hard to believe the iPod is only of this decade, with now more than 250 million of them sold, and digital music sales playing the norm. The iPhone, with more than 50 million sold, has launched a consumer-smartphone rush. While it may never grab the kind of market share in wireless that the iPod has in music, it has been a pioneer and leader with the App Store, strongly influencing mobile advertising and portable gaming. In the latter category alone, Apple owned a 19% share of the portable-gaming software revenue at the end of 2009, up from 5% in 2008.

The iPad, meanwhile, with as many as 8 million already sold, by some estimates, has spurred a touch-tablet tempest in the industry with almost every major PC and phone maker adding it to their product portfolios. And this is an industry that has been touting tablets for years. Apple's involvement got them moving. "Tablets are now expected to be a $17 billion business by 2014, according to researcher IDC. Other estimates have come in lower, but either way, it's a big jump from the one million or so units that were sold annually before the introduction of the iPad."

Even the Mac enjoyed resurgence this decade, in part because of the halo effect of the iPod, in part because of the addition of Intel processors in 2006, and in part due to aggressive marketing via both the "Switch" and "Get a Mac" series of ads that ran from 2002 through 2009. Apple computers now have about a 7% U.S. market share, up from around 2% early in the decade.

Apple's TV spots from the past decade are like a hit parade of the most memorable ads. Who can forget the dancing silhouettes with white iPods and earbuds against hue-popping backgrounds, or the "Mac vs. PC," dork vs. hipster sly hilarity, or even the utilitarian talk-touch-and-swipe-to-get-it-all-done spots for the iPhone? However, Apple ads had other influences on advertising. The introduction of the white background in the "Switch" Mac ads in 2002 was the beginning of an aesthetic not only for Apple, but for many imitators as well.

The iPad, in particular, is having some major advertising-industry impact. The iPad's design alone has influenced all of display advertising, while Apple's iAd platform supercharged the mobile-ad industry just by its mere announcement.

Agency relationships
Apple and its agency, Omnicom Group's TBWA, make a great case study on the benefits of long-term agency-client relationships. The two have been together since the iconic "1984" Super Bowl spot, although the agency was off the account from 1986 until 1997, which is almost identical to the years CEO Steve Jobs was absent from Apple (1985-1997).

So maybe it is the relationship between Mr. Jobs and longtime TBWA creative chief Lee Clow (who is now chairman and global director of Media Arts Lab and chief creative of the TBWA network) that is the key to the magic, and the long string of well-regarded marketing campaigns. Whatever it is, it works. In 2006, TBWA created Media Arts Lab to specifically serve Apple as a new type of ad agency that creates culture, not just commercials.

Sure, it's called the Cult of Apple for a reason, but we guarantee any marketer would kill for that kind of loyalty -- for all its innovative gadgets and gizmos, it's Apple's greatest asset.

There are certainly the over-the-top fanboys (and girls), but even less dedicated customers seem to have a blind spot for Apple.

Recall the media flare-up after reports began surfacing that because of the way the iPhone's antenna is configured, calls were dropped when it was gripped a certain way. Apple initially addressed the so-called Antennagate complaints with e-mails that advised, basically, to not hold the phone that way. But amid mounting complaints a few weeks after the phone's debut, Mr. Jobs held a press conference to announce Apple would give out bumpers to iPhone 4 buyers to fix the problem.

But not before he pointed out that all "smartphones have weak spots. This is not unique to the iPhone 4," and even showed how three other competitors' phones -- BlackBerry, HTC and Samsung -- also dropped bars when held a certain way.

BlackBerry's parent company, Research in Motion, fired back the next day: "Apple's claims about RIM products appear to be deliberate attempts to distort the public's understanding of an antenna-design issue and to deflect attention from Apple's difficult situation." Yet any indignation at Apple's product gaffe and less-than-humble apology was generally ignored -- or even derided. Tech website Gizmodo took a lot of shots for trying to rally customers to force Apple to come up with a solution.

Apple retail stores have come to define the high-end, low-key, over-the-top customer-service shopping experience of the later part of this decade. And while Apple intends for all of its 273 stores to sell its wares, it also is deliberate in its use of them as marketing tools. Eleven of the stores in particular are meant to act as brand ambassadors.

According to Apple filings, those stores "have been designed and built to serve as high-profile venues to promote brand awareness and serve as vehicles for corporate sales and marketing activities." And they specifically budget expenses for those stores, to the tune of $65 million in 2009. Compare that to its overall $501 million spent in worldwide advertising in 2009, and the tally is for every $8 Apple spent on ads, they spent $1 on those 11 signature stores.
Posted by Robalini at Thursday, October 21, 2010

Email ThisBlogThis!Share to TwitterShare to FacebookShare to Pinterest
Labels: Apple