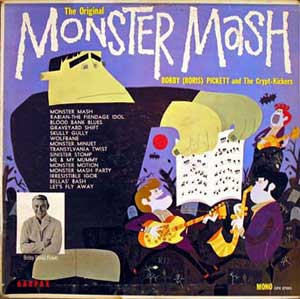 Ask someone to name a Christmas song, and you might get a hundred different answers. Ask them to name a Halloween song, however, and they are almost assured to respond with the “Monster Mash.” For almost half a century, this catchy little ditty has been considered the anthem of the holiday, and has probably been played at just about every Halloween party held since the early 60s. Today, we take a loving look back at this classic composition.

Few had ever heard of Bobby Pickett prior to 1962. A struggling singer and actor, they might never have heard from him, except that Mr. Pickett possessed the ability to do a pretty good Boris Karloff impersonation. And with the help of some famous friends, he wrote a very catchy little tune about a mad scientist whose monstrous creation invents a catchy little dance – the Monster Mash.

Bobby Pickett’s new song didn’t garner much attention at first from record labels, until he met producer Gary S. Paxton, who had already scored a novelty hit with “Alley Oop” a couple of years prior. Paxton assembled a group of musicians, dubbed The Crypt Kickers (that included the legendary Leon Russell on piano), to record the song. Pickett supplied the voice of the mad scientist narrator (in the spirit of Karloff), as well as throwing in an equally impressive Bela Lugosi impression for one of the tune’s later lines.

The song, and its associated dance (based loosely on the “Mashed Potato”, another popular craze), were quickly embraced by the public, with the release rising to the #1 position on the Billboard charts in October of 1962. Its re-releases also charted in 1970 and 1973, and it has since become perhaps the most beloved Halloween song of all time, played at millions of holiday parties and festivities every year. Numerous artists have attempted to cash in on its popularity with their own renditions as well. The Beach Boys did a cover of it in 1964, Vincent Price did his own rendition in 1977, and believe it or not, the real Boris Karloff was so impressed by the song that he performed it himself on the television show, Shindig, in 1965. More recently, the Misfits recorded their own popular rendition in 1997 and Smashing Pumpkins released a live version of the song in 2008.

If you have your own fond memories of doing the “Monster Mash,” we welcome them in our comments section, as we tip our hats to Bobby Pickett. If imitation is the sincerest form of flattery, he must be mighty flattered. His timeless composition remains beloved by millions, almost fifty years later, and shows no signs of slowing.

The original track (complete with a clever Legos video!):
http://www.youtube.com/watch?v=LkKKzTYIe3Q

Email ThisBlogThis!Share to TwitterShare to FacebookShare to Pinterest
Labels: Haloween