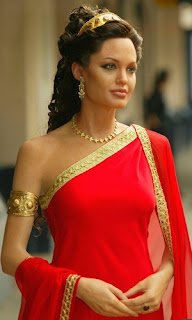 File this one under tantalizingly possible. James Cameron and Sony Pictures Entertainment are exploring the very real possibility that he will direct Angelina Jolie in a 3D version of Cleopatra, an SPE adaptation of the Stacy Schiff book Cleopatra: A Life. Jolie is attached and anxious to make the movie. Scott Rudin, who acquired the book, is producer. The talks are serious but by no means conclusive yet. Meanwhile, Deadline's Nikki Finke reports that Sony Pictures Entertainment Co-Chair Amy Pascal decided to fast-track its PG-13 and 3D Cleopatra project after screenwriter Bran Helgeland wrote what was is being described as a "brilliant script deserving of epic treatment" all about "what the Romans took from Egypt". In addition, Pascal wants to own the Angelina Jolie franchise the same way it owns the franchises of Adam Sandler and Will Smith because "she's a real star who can open a movie by herself" and "she knows she was born to play this part" because it's the "greatest female heroine" that ever lived. Pascal is hoping for a start date in 2011 but has acknowledged that "it won't be cheap" and is calling this her Gone With The Wind epic. Indeed, a project of this size and scope is a huge risk for any studio, especially considering how much attention will be focused on the production and the last time the story of Cleopatra was made into a movie. The Egyptian queen got her big screen closeup in the 1963 film with Elizabeth Taylor in the title role. Joseph L. Mankiewicz directed the film, which started with a $2 million budget that ballooned to $44 million (the equivalent of over $300 million today) not the least because Taylor became ill and almost died. The production nearly bankrupted 20th Century Fox, despite being the year's highest grossing pic with $26 million. However, with James Cameron as director, he has the ability to produce a huge worldwide spectacle where every penny will be on the big screen. He has several of his own projects in the works, including a title called The Dive, but there is no other outside project he is looking at but this one as he develops the Avatar sequel.

Stacy Schiff's biography peels away the layers to reveal the true Cleopatra, a much more interesting woman than the Hollywood version, and, as it turns out, a formidable queen after all, according to reviews. A Pulitzer Prize-winning American nonfiction author and guest columnist for The New York Times, Schiff digs up astonishing and rare facts about the queen that could make the film into an entirely new story. Schiff herself has said about Jolie as Cleoptra, "physically, she's the perfect look, and is hoping for Brad Pitt to play Mark Antony (just as Liz Taylor's then lover, Richard Burton, did in the 1963 epic). "Angelina Jolie radiates grace and power, exactly the qualities that Stacy Schiff finds in her biography of the most intriguing ruler who ever lived," the book's publisher, Little Brown's Michael Pietsch, told reporters.

As for 35-year-old Jolie, she has been a tomb raider and a spy and even a queen (she played Queen Olympias in 2004's Alexander.) But she has had a lifelong fascination with Cleopatra and has always wanted to play the Queen of the Nile. She once told reporters: "I haven’t done a historical epic of that nature and she’s always been fascinating to me because I feel like, as much of her story has been done big, it’s never been done accurately. Not that any movie can get history perfectly well. There is no universal truth to history in some films, but you can get closer and I feel there’s a lot that has been unexplord about her. But there's a lot that would have to come together for that to work." And, as recently as at Sony's Salt premiere in Hollywood, she told reporters "I would be honored" to play Cleopatra in an upcoming new biopic. "But," Jolie added, "we haven't gotten the script yet." But then Helgeland's screenplay came in. Scott Rudin bought the rights to the book envisioning Jolie in the role from the very beginning and later acknowledging that Cleopatra "is being developed for and with Jolie".

Since then, Jolie has been heavily involved in the project. In still another interview, Jolie said, "I will play it differently to Elizabeth Taylor, but I could never be as lovely as she was. We are trying to uncover the truth about her as a leader and not just a sex symbol which she really wasn't -- she didn't have many lovers, maybe only two, and they're men she had children with." Angelina has said she was stunned by what she learned when she started researching Cleopatra. "She was misunderstood and her life story was written wrongly. I always thought her life was very glamorous. Then I read her story and found a different side to her - that she was a mother, leader and an intellect who spoke five languages! Her upbringing also reflected her relationship with Rome -- all that is much more interesting than what she was summed up to be."

The Jolie project isn't the only Cleopatra film to make headlines in recent years. In 2008, director Steven Soderbergh reportedly began developing Cleo, a 3D rock musical version of the Egyptian queen's story with Catherine Zeta-Jones in mind for the title role. The film fell by the wayside.
Cameron has done most of his directing at Fox with Titanic and Avatar, and he is hard at work on a sequel to the latter. As a producer, Cameron is making the Shane Salerno-scripted 3D reboot of Fantastic Voyage for Fox, but he is already working off campus, moonlighting at Universal as producer of At the Mountains of Madness, the adaptation of HP Lovecraft that Guillermo del Toro plans to direct in 3D.
Posted by Robalini at Tuesday, October 19, 2010