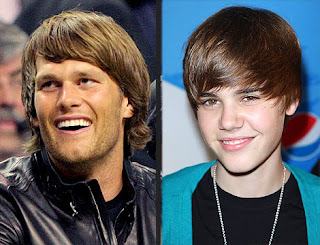 “Call up Mr. Brady. Tell him to leave his hair to that guy that sings Baby.”

Jesus Christ. Just when I think Tom Brady can’t sink any lower he does. I mean it’s one thing for Gisele to be leading him around by the balls, but now Justin Bieber is crushing him? JUSTIN FUCKING BIEBER! Are you shitting me! Cut the fucking hair Tom! Enough is enough! Seriously when Bieber is calling your shit out it’s time to make a change. Don’t get me wrong if I see Beiber walking down the street I’ll punch him right in his pretty little nutsack, but I’m sick and tired of fighting your battles. Time to be man. Let’s get back to what won us 3 superbowls. Short hair and impregnating chicks left and right. That’s what great Michigan men do! Because at the rate we’re going pretty soon Biebs is going to be balls deep in your wife while you’re just sitting their all cuckolded and shit.
Posted by Robalini at Tuesday, October 19, 2010