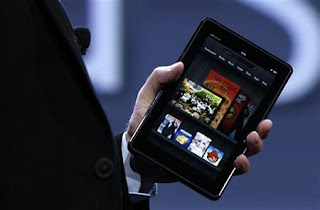 The rock-bottom price of the new Kindle Fire tablet computer is raising questions about Amazon.com Inc's ability to keep up with demand and the device's effect on the company's already razor-thin profit margins.

Amazon's billionaire Chief Executive Jeff Bezos unveiled the Fire on Wednesday at a lower-than-expected price of $199.

Bezos said Amazon is making "millions" of the tablets, without being more specific. However, he urged customers to pre-order the device early.

"When Bezos quipped that people should get their pre-orders in quick, that wasn't just a sales pitch," said Brian Blair, an analyst at Wedge Partners. "That was him warning this will sell out."

When the first Kindle came out in 2007, Amazon hadn't made enough and the e-reader sold out in less than a week. That meant the company missed out on sales and got the device into fewer customers' hands, limiting quick adoption...