The Dark Side of Apple 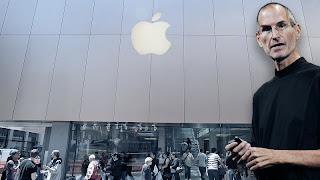 Robalini's Note: Great writing demands to be written at the most inconvenient of times. While many (including The Konformist) have spent the last few days gushing about the late Steve Jobs, Ryan Tate of Gawker.com has decided to do the contrarian task of pointing out some of his many flaws. And while Jobs may not have appreciated it done about him, part of him would probably admit this is the task that precisely needs to be done now...

What Everyone Is Too Polite to Say About Steve Jobs
Ryan Tate
Oct 7, 2011
http://gawker.com/5847344/what-everyone-is-too-polite-to-say-about-steve-jobs

In the days after Steve Jobs' death, friends and colleagues have, in customary fashion, been sharing their fondest memories of the Apple co-founder. He's been hailed as "a genius" and "the greatest CEO of his generation" by pundits and tech journalists. But a great man's reputation can withstand a full accounting. And, truth be told, Jobs could be terrible to people, and his impact on the world was not uniformly positive.

We mentioned much of the good Jobs did during his career earlier. His accomplishments were far-reaching and impossible to easily summarize. But here's one way of looking at the scope of his achievement: It's the dream of any entrepreneur to affect change in one industry. Jobs transformed half a dozen of them forever, from personal computers to phones to animation to music to publishing to video games. He was a polymath, a skilled motivator, a decisive judge, a farsighted tastemaker, an excellent showman, and a gifted strategist.

One thing he wasn't, though, was perfect. Indeed there were things Jobs did while at Apple that were deeply disturbing. Rude, dismissive, hostile, spiteful: Apple employees—the ones not bound by confidentiality agreements—have had a different story to tell over the years about Jobs and the bullying, manipulation and fear that followed him around Apple. Jobs contributed to global problems, too. Apple's success has been built literally on the backs of Chinese workers, many of them children and all of them enduring long shifts and the specter of brutal penalties for mistakes. And, for all his talk of enabling individual expression, Jobs imposed paranoid rules that centralized control of who could say what on his devices and in his company.

It's particularly important to take stock of Jobs' flaws right now. His successor, Tim Cook, has the opportunity to set a new course for the company, and to establish his own style of leadership. And, thanks to Apple's success, students of Jobs' approach to leadership have never been so numerous in Silicon Valley. He was worshipped and emulated plenty when he was alive; in death, Jobs will be even more of an icon.

After celebrating Jobs' achievements, we should talk freely about the dark side of Jobs and the company he co-founded. Here, then, is a catalog of lowlights:

The internet allowed people around the world to express themselves more freely and more easily. With the App Store, Apple reversed that progress. The iPhone and iPad constitute the most popular platform for handheld computerizing in America, key venues for media and software. But to put anything on the devices, you need Apple's permission. And the company wields its power aggressively.

Apple's devices have connected us to a world of information. But they don't permit a full expression of ideas. Indeed, the people Apple supposedly serves — "the misfits, the rebels, the troublemakers" — have been particularly put out by Jobs' lockdown. That America's most admired company has followed such an un-American path, and imposed centralized restrictions typical of the companies it once mocked, is deeply disturbing.

But then Jobs never seemed comfortable with the idea of fully empowered workers or a truly free press. Inside Apple, there is a culture of fear and control around communication; Apple's "Worldwide Loyalty Team" specializes in hunting down leakers, confiscating mobile phones and searching computers.

Apple applies coercive tactics to the press, as well. Its first response to stories it doesn't like is typically manipulation and badgering, for example, threatening to withhold access to events and executives. Next, it might leak a contradictory story.

But Apple doesn't stop there. It has a fearsome legal team that is not above annihilating smaller prey. In 2005, for, the company sued 19-year-old blogger Nick Ciarelli for correctly reporting, prior to launch, the existence of the Mac Mini. The company did not back down until Ciarelli agreed to close his blog ThinkSecret forever. Last year, after our sister blog Gizmodo ran a video of a prototype iPhone 4, Apple complained to law enforcement, who promptly raided an editor's home.

And just last month, in the creepiest example of Apple's fascist tendencies, two of Apple's private security agents searched the home of a San Francisco man and threatened him and his family with immigration trouble as part of an scramble for a missing iPhone prototype. The man said the security agents were accompanied by plainclothes police and did not identify themselves as private citizens, lending the impression they were law enforcement officers.

Apple's factories in China have regularly employed young teenagers and people below the legal work age of 16, made people work grueling hours, and have tried to cover all this up. That's according to Apple's own 2010 report about its factories in China. In 2011, Apple reported that its child labor problem had worsened.

In 2010, the Daily Mail managed to get a reporter inside a facility in China that manufactures products for Apple and the paper shared a bit about what life is like:

With the complex at peak production, operating 24 hours a day, seven days a week to meet the global demand for Apple phones and computers, a typical day begins with the Chinese national anthem being played over loudspeakers, with the words: 'Arise, arise, arise, millions of hearts with one mind.'

As part of this Orwellian control, the public address system constantly relays propaganda, such as how many products have been made; how a new basketball court has been built for the workers; and why workers should 'value efficiency every minute, every second'.

With other company slogans painted on workshop walls - including exhortations to 'achieve goals unless the sun no longer rises' and to 'gather all of the elite and Foxconn will get stronger and stronger' - the employees work up to 15-hour shifts.

Down narrow, prison-like corridors, they sleep in cramped rooms in triple-decked bunk beds to save space, with simple bamboo mats for mattresses.

Despite summer temperatures hitting 35 degrees, with 90 per cent humidity, there is no air-conditioning. Workers say some dormitories house more than 40 people and are infested with ants and cockroaches, with the noise and stench making it difficult to sleep.


A company can be judged by how it treats its lowliest workers. It sets an example for the rest of the company or in Apple's case, the world.

In Person and At Home

Before he was deposed from Apple the first time around, Jobs already had a reputation internally for acting like a tyrant. Jobs regularly belittled people, swore at them, and pressured them until they reached their breaking point. In the pursuit of greatness he cast aside politeness and empathy. His verbal abuse never stopped. Just last month Fortune reported about a half-hour "public humiliation" Jobs doled out to one Apple team:

"Can anyone tell me what MobileMe is supposed to do?" Having received a satisfactory answer, he continued, "So why the fuck doesn't it do that?"

"You've tarnished Apple's reputation," he told them. "You should hate each other for having let each other down."

Jobs ended by replacing the head of the group, on the spot.

In his book about Jobs' time at NeXT and return to Apple, The Second Coming of Steve Jobs, Alan Deutschman described Jobs' rough treatment of underlings:

He would praise and inspire them, often in very creative ways, but he would also resort to intimidating, goading, berating, belittling, and even humiliating them... When he was Bad Steve, he didn't seem to care about the severe damage he caused to egos or emotions... suddenly and unexpectedly, he would look at something they were working on say that it "sucked," it was "shit."

Jobs had his share of personal shortcomings, too. He has no public record of giving to charity over the years, despite the fact he became wealthy after Apple's 1980 IPO and had accumulated an estimated $7 billion net worth by the time of his death. After closing Apple's philanthropic programs on his return to Apple in 1997, he never reinstated them, despite the company's gusher of profits.

It's possible Jobs has given to charity anonymously, or that he will posthumously, but he has hardly embraced or encouraged philanthropy in the manner of, say, Bill Gates, who pledged $60 billion to charity and who joined with Warren Buffet to push fellow billionaires to give even more.

"He clearly didn't have the time," is what the director of Jobs' short-lived charitable foundation told the New York Times. That sounds about right. Jobs did not lead a balanced life. He was professionally relentless. He worked long hours, and remained CEO of Apple through his illness until six weeks before he died. The result was amazing products the world appreciates. But that doesn't mean Jobs' workaholic regimen is one to emulate.

There was a time when Jobs actively fought the idea of becoming a family man. He had his daughter Lisa out of wedlock at age 23 and, according to Fortune, spent two years denying paternity, even declaring in court papers "that he couldn't be Lisa's father because he was 'sterile and infertile, and as a result thereof, did not have the physical capacity to procreate a child.'" Jobs eventually acknowledged paternity, met and married his wife, now widow, Laurene Powell, and had three more children. Lisa went to Harvard and is now a writer.

Steve Jobs created many beautiful objects. He made digital devices more elegant and easier to use. He made a lot of money for Apple Inc. after people wrote it off for dead. He will undoubtedly serve as a role model for generations of entrepreneurs and business leaders. Whether that's a good thing or a bad thing depends on how honestly his life is appraised.
Posted by Robalini at Saturday, October 08, 2011

This article is such bullshit, and another reason why the Internet should have some sort of editorial fact-checking before people are allowed to post stuff on the Internet. This is just another example of some prick (Ryan Gawker -- one of the biggest pricks around) spouting his mouth off about fictional stuff and pretending that it's true. For example, Apple has a strict Supplier Code of Conduct that their vendors across the world (including China) must obey, or Apple will intervene. Check out this page here: http://images.apple.com/supplierresponsibility/
Furthermore, when Apple discovered underage labor at their China factories (because they were AGGRESSIVE ABOUT HUNTING IT DOWN AND STOPPING IT), they reported the abuses to the local authorities and implemented programs to get those kids back in school:
http://images.apple.com/supplierresponsibility/pdf/Apple_SR_2011_Progress_Report.pdf
I won't even get into exposing Ryan Gawker's other fictional statements in his article, because he has built his entire career on using his imagination -- instead of facts -- for his writing.