The True Cost Of The Wall Street Bailout 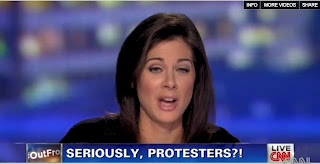 CNN's Erin Burnett ventured down to Occupy Wall Street and told some protesters that "taxpayers actually made money on the Wall St. bailout." She made fun of the protesters on-air and derided their knowledge of the bailouts.

The only problem for Erin, is that she's the one who didn't get her facts straight.

That's right, the banking apologista, who is engaged to a Citigroup executive, and is infamous for having her ass handed to her on camera by Congressman Brad Sherman over AIG bonuses, didn't do her bailout research before she decided to ridicule protesters for not doing doing their bailout research.

According to the U.S. Treasury's own figures, available publicly to any reader, including pneumatic (we understand if you need a dictionary for that one, Erin) and arrogant CNN reporters, as of TODAY, taxpayers are still more than $95 BILLION IN THE RED on TARP. And that's including all interest and other income. There is still $122 BILLION of TARP funds that have NOT yet been paid back.

We understand that Burnett was excluding GM, but she somehow missed that AIG, alone, still owes over $50 BILLION.

The "we made money on the bailout" meme just won't die. Facts and in the case of Burnett, poor research, be damned...

It seems that Erin conveniently forgets to mention the trillions in stealth bailouts doled out to Wall Street from Bernanke and Geithner, at 0% interest. We haven't forgotten Erin. And neither have the fans of the late Bloomberg reporter Mark Pittman, who fought the Fed for this important reveal...

We all know about TARP, the Troubled Asset Relief Program, which spent $700 billion in taxpayers’ money to bail out banks after the financial crisis. That money was scrutinized by Congress and the media. But it turns out that that $700 billion is just a small part of a much larger pool of money that has gone into propping up our nation’s financial system. And most of that taxpayer money hasn’t had much public scrutiny at all. According to a team at Bloomberg News, at one point last year the U.S. had lent, spent or guaranteed as much as $12.8 trillion to rescue the economy. The Bloomberg reporters have been following that money. Alison Stewart spoke with one, Bob Ivry, to talk about the true cost to the taxpayer of the Wall Street bailout.

This lie must be beaten back by all of us like whack-a-mole every time it rears its ugly head. Please help me by sending this information to any politician, media figure, banker, neighbor or robot that you find repeating it -- they can take our money, but they don't own the truth.

Let's break it down:

1. TARP itself hasn't even made money. AIG alone still owes us $75.6 billion. However, they always add the caveat "Other than AIG..." when they say that the bailouts were "profitable." But the AIG money was directly paid to many of these same banks that "paid back their TARP" at an outrageous 100 cents on the dollar! Mind you, this was done by government officials that were the former employees and current shareholders of the very banks they were helping. Let's make banks like Goldman Sachs, Bank of America and Societe Generale pay back the $105 billion of stolen taxpayer money before we let anyone say "TARP was paid back."

2. TARP is a tiny little part of a massive amount of taxpayer support. TARP is actually less than 10 percent of your tax dollars that have been handed to the banks. And now the banks "paid back" the tiny slice that is TARP with our money, and you are supposed cheer them for savvy. At this very moment, the taxpayer is still owed $2.02 trillion dollars for the bailout by our politicians and banksters, and that number is growing every day.

Never mind the money that these same banks make getting endless 0 percent interest loans from the Federal Reserve (aka you) while either they lend it back to you at 14 percent interest or just lend it right to back the government and pocket the yield. Never mind the multitude of benefits they get from being Too Big To Fail. But you're not supposed to pay attention to that; you're only supposed to notice how fast they paid back TARP!

So instead of these politicians looking for the only obvious place to find the money --clawbacks from the people who continue to steal it -- we are now being subjected to outright lies as they once again pick the banksters over the people who voted them in. But don't let them, or anyone in the media, get away with it without hearing from you.

To read the full story:

Memo To Erin Burnett - Shut Your Banking Apologista Pie Hole And Get Your Facts Straight On The Bailout, Seriously!
10-6-2011
http://dailybail.com/home/memo-to-erin-burnett-shut-your-banking-apologista-pie-hole-a.html
Posted by Robalini at Sunday, October 09, 2011