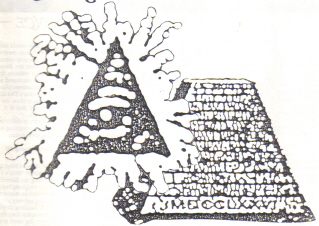 Steamshovel Press # 23
All conspiracy. No theory.

Moving beyond the confines of 9/11, Thomas reviews the current parapolitics around the globe, starting with the assassination-by-polonium-poisoning of Alexander Litvinenko, through the Valerie Plame spy scandal, to the remaining mysteries of the Trade Towers' destruction. "Parapolitics is activity that happens alongside the normal politics people read in the papers and see on TV, not instead of it," explains Thomas. "It's not just a matter of saying that the media just lies and that the Bush baddies are responsible--although gawd knows that's true. We ignore the conspiracies that exist in the wider world, such as global jihad and the assassinations that culminated with Litvinenko, at our peril." This lecture will put these other global conspiracies in the context of what's happening in America. Also includes a tribute to the late author of Illuminatus!, Robert Anton Wilson, including rare footage. 1 hour DVD, $10

Steamshovel editor’s television appearances and lecture footage, including a news report on the UFO he witnessed at Area 51; a roundtable discussion from the Fox network on the JFK assassination, the Y2K affair, global surveillance and conspiracy theory; lectures on the Maury Island UFO and UFO researcher deaths; and the Octopus.

Join Steamshovel Press editor Kenn Thomas as he tracks parapolitics—aka conspiracy theory—in the 21st Century. Thomas has traveled and lectured about conspiracies throughout America for the past decade, appearing in the major media as the sharpest critic of the consensus view of current affairs. From the Kennedy assassination to 9/11, Thomas examines the underlying parapolitics that animate the secret elites and the war ravaged planet they manipulate. Parapolitics collects Thomas' lecture remarks, interviews, correspondence and articles printed in the underground press from around the world. PDF only, $20 (via disk or supply e-mail address)

All of the above discount, $50

Please supply an e-mail address if ordering PDFs sent via internet. Otherwise, a CD will be sent.

NOTE: Steamshovel Press back issues 4 through 23 are available for $10 each. Photocopies will be supplied when actual issues are no longer available.
Posted by Robalini at Sunday, October 16, 2011