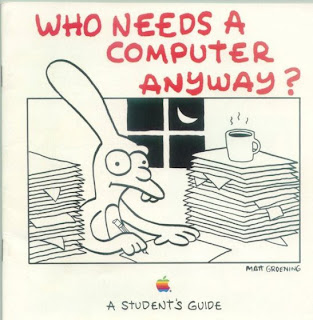 Any fan of The Simpsons should suspect the show's creator Matt Groening has a love of Apple Computers: in the episode "Bart Gets Hit by a Car", the devil is revealed using a Mac to run operations in hell. It turns out that Groening wasn't only a fan of Steve Jobs' company: in 1989, he was hired by Apple to provide artwork for a Macintosh brochure. It featured characters from his Life in Hell weekly comic strip, and came out less than a year before The Simpsons became a cultural madness. The brochure is a nice little bit of cultural history (kind of like seeing The Beatles perform in 1962) and gives some good tips on how to use a Mac. To see the whole brochure visit Comics Alliance: