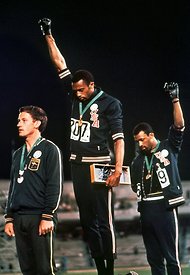 E of S Nation: just a reminder that you can purchase the John Carlos Story right now at http://www.haymarketbooks.org/hc/The-John-Carlos-Story

Those who want to support Teaching for Change, can buy it at
http://zinnedproject.org/posts/11445

Those who support the amazon cabal of global doom can buy it at
http://www.amazon.com/John-Carlos-Story-Sports-Changed/dp/1608461270/thekonformist

In struggle and sports,
Dave Zirin

More than 40 years after Tommie Smith and John Carlos ignited the sports world with their black-gloved fists raised on the victory stand at the 1968 Mexico City Olympics, Carlos says, “I still feel the fire.”

Any doubts that time and age have somehow diminished the passion that fueled his track and field career are dispelled with the publication of “The John Carlos Story,” written with Dave Zirin and published by Haymarket Books.

“If I shut my eyes, I can still feel the fire from those days,” Carlos, 66, says, as early as the second page of a memoir with the intensity and power of a 200-meter dash. “And if I open my eyes, I still see the fires all around me. I didn’t like the way the world was, and I believe that there need to be some changes about the way the world is.”

Those who thought they knew Carlos as a brash New Yorker may be surprised by some of his more personal recollections, including having an early obsession with swimming across the English Channel and having Fred Astaire as a childhood hero. Carlos says Astaire would show up outside the Savoy Ballroom in Harlem in “top hat, tails, shoes and cane,” watch Carlos and his young friends perform dance and acrobatic routines and then reward them with silver dollars.

And there are the poignant admissions that he was embarrassingly dyslexic as a grade-schooler (“in those days they didn’t call you dyslexic, they called you dummy”) and that he “didn’t care a lick if I won the gold, silver and bronze” in the 200-meter final in Mexico (he won the bronze behind Smith and Peter Norman, an Australian).

“Before the race started,” Carlos writes, “I made up my mind I wasn’t going to test Tommie for that gold medal.”

He adds, “I was there for the after-race.”

It is that after-race for which Carlos is most remembered. Carlos and Smith bowed their heads while the national anthem played, raising their fists to protest treatment of blacks in America. As a result, they were told to leave the Olympic Village.

The positive reception that Carlos says he is receiving on his book tour is far different from the bitterness and news media backlash that affected Smith’s and Carlos’s lives after Mexico, and different also from the way their relationship with each other evolved. Carlos’s first wife, Kim, whom he married while still in high school, committed suicide in 1977, four years after they split up, an event that led him into depression and still haunts him, he says.

Smith’s autobiography, “Silent Gesture,” written with David Steele, was published in 2007 and fractured Carlos’s relationship with him until they were reunited in Mexico City for a 40th-anniversary ESPN special.

“I understand Tommie a lot better now in terms of who he is, his attitude and his views,” Carlos said.

Carlos is less patient with the state of track and field and its assorted drug scandals. “How can you live with yourself and call yourself a champion, when you repeatedly have lied to yourself and lied to society?” he asked. “It’s gotten so bad that it’s actually destroying the sport and eating out the root of the sport from the bottom, and the bottom is about to fall out.”

Carlos was also dismissive of sprinting’s current sensation, Usain Bolt of Jamaica, saying, “I don’t look at him.”

At an appearance Carlos made last week at the Capital City Public Charter School in Washington, a student asked why he had risked his career to take such a controversial stand. Carlos replied, “Because it was so many individuals that were in positions of power that chose to just lay back.”

Carlos will appear at the Rosenthal Pavilion in New York University’s Kimmel Center on Wednesday night with his co-author, Zirin, and the writer and commentator Cornel West.

Now remarried and working as a guidance counselor at Palm Springs High School in California, Carlos offers his own prescriptions for success and survival. Don’t run from the moment, he tells students; in return, he says, they teach him how to stay young.

“I’m where I need to be, or should be, or could be in my life,” he writes. “I think as well as I’ve worked with kids, there are things I don’t think I had the opportunity to do in this life. I think God had intentions for me to do more, but yet still I hear the breath of God telling me, ‘You did more than most people ever thought you would be able to do under the circumstances, so just keep on keepin’ on and we’ll see what comes.’ When I hear that voice, I tell God politely that he sounds too much like the devil for my taste.”
Posted by Robalini at Sunday, October 16, 2011