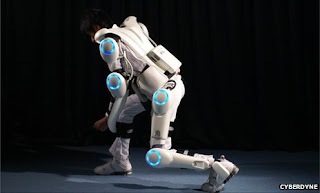 You don't have to be a Jedi to make things move with your mind.

Granted, we may not be able to lift a spaceship out of a swamp like Yoda does in The Empire Strikes Back, but it is possible to steer a model car, drive a wheelchair and control a robotic exoskeleton with just your thoughts.

"The first thing is to clear your mind…to think of nothing," says Ed Jellard; a young man with the quirky title of senior inventor.

We are standing in a testing room at IBM's Emerging Technologies lab in Winchester, England.

On my head is a strange headset that looks like a black plastic squid. Its 14 tendrils, each capped with a moistened electrode, are supposed to detect specific brain signals.

In front of us is a computer screen, displaying an image of a floating cube.

As I think about pushing it, the cube responds by drifting into the distance.

Admittedly, the system needed a fair bit of pre-training to achieve this single task. But it has, nonetheless, learned to associate a specific thought pattern with a particular movement.

The headset, which was developed by Australian company Emotiv for the games industry, has been around for some time. But it is only now that companies such as IBM are beginning to harness the wealth of data that it can provide.

Using software developed in-house, researchers have linked the Emotiv to devices such as a model car, a light switch and a television.

Control signals come from two main sources; electroencephalography (EEG) measurements of brain activity, and readings of nerve impulses as they travel outwards to the muscles.

Already the team has used the system to help a patient with locked-in syndrome, whose healthy, active mind became trapped in a motionless body following a stroke.

"We linked the headset to the IBM middleware, and when he pushed the cube on the screen, that behaved like a click of the mouse - so he was able to use the computer," explained IBM's Kevin Brown.

Many commercial mind control technologies are designed to restore physical ability to those who have lost it.

"A disabled patient who can't move can instead navigate such a robot around his house to participate in the social life of the family," explains the team leader, Professor Jose del Millan.

"To do that, a helmet detects the intention of some physical movement and translates it into action."

Japanese company Cyberdyne is helping people who cannot walk to regain mobility by dressing them in a full-body robotic suit called Hal.

Just as some of IBM's readings come from nerve impulses, rather than brain waves, Cyberdyne uses tiny sensors on the limbs to measure the subject's intention to move, even if the physical act is impossible.

The robot body responds by moving its arms or legs. Webcams and computer screens enabling the user to pilot their machine and communicate with friends and family through their proxy body.

Outside the healthcare field, another implementation, being developed by EPFL in partnership with car maker Nissan, is an intelligent vehicle that can use brainwave data.

Supported by numerous external sensors and cameras, brain wave sensors read what the driver is planning to do next.

Having anticipated their intentions, the car takes over, eliminating the need for tedious and time consuming physical movement.

For those who prefer pedal power, Toyota is working with Saatchi & Saatchi, Parlee Cycles and DeepLocal to develop a bicycle which can shift gear based on its rider's thoughts.

Headsets and helmets offer cheap, easy-to-use ways of tapping into the mind. But there are other, more invasive techniques being developed.

At Brown Institute for Brain Science in the US, scientists are busy inserting chips right into the human brain.

Subjects still have to be physically "plugged" into a computer via cables coming out of their heads, in a setup reminiscent of the film The Matrix. However, the team is now working on miniaturising the chips and making them wireless.

BrainGate is developing ways of using the output to control a computer cursor, on-screen keyboard, and even manipulate robotic arms.

After testing it on monkeys, the scientists have now started human trials. Lead researcher Prof John Donoghue hopes that one day, his groundbreaking research will help people with spinal cord injuries or locked-in syndrome to walk again just by thinking of moving their limbs.

But extracting information from the brain, be it by internal or external sensors, is only part of the story.

Much of the current research effort is looking at how to efficiently process and utilise the vast streams of data that the brain produces.

Turning analogue thoughts into digital information links human beings directly to electronic information networks, such as the internet. The brain becomes becomes yet another sensor to be analysed and interrogated.

And as techniques for crunching that output get more sophisticated, the technology it drives will move beyond simple device control.

"People like data," said IBM's Ed Jellard. "So if you can see patterns of data, the geekier people will be very interested to see what is going on in their brain and how it is changing over time.

"I would be interest to know if my brain is getting stronger and if I have more intense thoughts. Things like that could be useful."

While it is possible to translate brain waves into machine processable data, there remains something unique and special about those signals that rocket around inside our skulls.

They are not the same as lasers in a fibre optic cable or electrons in a microprocessor, and tapping the mind will raise philosophical and ethical questions, according to Prof Noel Sharkey.

"Once the military get a hold of it, they will push it very hard," he explains.

"At the moment they are filling the airspace in Afghanistan with drones that only one person can control - but if they get the helmets well enough developed, they'll be able to control a number of planes or robot warriors directly with their thoughts."

There are also questions about what form cyber crime would take in the age of the wired mind?

"Imagine some kind of a wireless computer device in your head that you'll use for mind control - what if people hacked into that, what could they do to you and your property?," continues Prof Sharkey.

"And what if you are forced to wear a device and someone controls you with his thoughts, making you do things?..."

The possibilities, both positive and negative, are literally mind boggling.
Posted by Robalini at Sunday, October 16, 2011