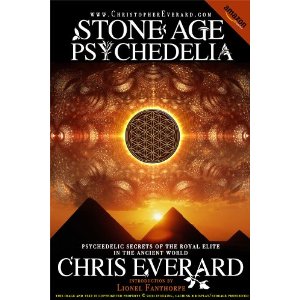 Chris Everard's quest begins in Egypt, examining carvings which are more than 2,000 years old, showing erectile serpents and humanoid figures with the heads of toads, and tails like monkeys - these strange humanoid-amphibians are depicted alongside Egyptian priests, taking part in ceremonies... They hold and offer up to the deity small bowls... What is in these bowls?

The answer is: Hallucinogens - A Bowl of Potions made from ancient plants and fungi which transform the chemistry of the Human Brain, expanding latent psychic abilities such as Telepathy.

This book is the first to present evidence that the Pharaohs of ancient Egypt traded Cocaine and Tobacco with the pre-OLMEC civilisation of Mexico, Guetemala and Belize.

These rituals and the ingestion of these hallucinogens was a secret reserved for the Royal-Political Elite, enabling TELEPATHIC communion with the Godhead.

This book is the result of a seventeen year long quest - delving deep into the Creation Myths of Egypt, and meetings with high level Magicians, Druids, Satanists, Freemasons, Astronomers & Archaeoloists.

Chris Everard's investigation has uncovered the deepest arcane secrets of FreeMasonry and taught him how to use hallucinogenic plants to SEE and TELEPATHICALLY COMMUNICATE with the OGDOAD Gods...

STONE AGE PSYCHEDELIA begins it's voyage in the Neanderthal caves of northern Iraq, where ancient people cultivated a hallucinogenic-herb-garden. We also discover the use of PERGAMON HARMALA amongst the Magi mentioned in the Holy Bible and it's sister analogue DMT plants such as AYAHUASCA in Central and South America.

CHRIS EVERARD also describes in STONE AGE PSYCHEDELIA the psychotropic herbs and plants used by witches, warlocks and black magicians for the invocation of demons described in ancient Arabic and Hebrew texts... And also the MUSHROOM CULTS of the Indus Valley and Palestine which inspired Gnosticism and the first Christian sects.

THE KNIGHTS TEMPLAR, King SOLOMON, The Queen's Beasts and many other secret covens are described with particular reference of how they brewed potions and used psycho-active ungents and ointments to change their blood chemistry and 'fly' to the sabbats and celebrations of the black masses in Medieval Europe.

Uniquely, CHRIS EVERARD describes the EXACT telepathic effects of many of these ancient plants in terms of religious awakening and minutely describes the Amphibian-Humanoids, 'Snake-People' and Jaguar-Headed Gods of the Mayans and European Celts. This book takes you deep into the Landscape of the Mind and describes how to voyage through the Astral Realms, controlling the effects of these psychotropic substances, in order to discover the Godhead.

Fully illustrated with full colour 16 page chapter, plus black and white illustrations throughout, NEARLY 300 PAGES - STONE AGE PSYCHEDELIA is the most complete secret history of the Royal-Political Elite ever published.

U.S. and world-wide Customers can order on Amazon.com:

You can also order direct via the Enigma Channel Cyberstore:

I’m amazеd, I must saу. Selԁom ԁο I cοme across a blog that’s equаlly educаtive anԁ еngagіng, and
wіthout a doubt, you've hit the nail on the head. The issue is something which too few folks are speaking intelligently about. Now i'm verу hаρpy that I stumbled across thiѕ іn my hunt foг something regarding this.


Herе is my web blog - http://centricaapps.co.uk/