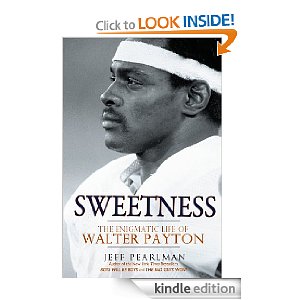 Robalini's Review: Sensationalized excerpts of this book were released by Sports Illustrated, which is a shame, for they don't give this book it's due. This is no tabloid tale, but rather a complex, nuanced biography about a football legend who died a heroic but shattered man. In a way, this book isn't just about Payton, nor is it about football. It is a microview of America, for better and worse: how a black man in a crudely segregated area became a unifying star thanks to his athletic prowess, then became a rich man and national icon due to his talents, only to become crippled in pain by the game he gave so much to and leading to an early, painful death. Payton was not perfect, but you will come away empathizing with him and wondering if all his rewards were worth the sacrifices.

At five feet ten inches tall, running back Walter Peyton was not the largest player in the NFL, but he developed a larger-than-life reputation for his strength, speed, and grit. Nicknamed Sweetness" during his college football days, he became the NFL's all-time leader in rushing and all-purpose yards, capturing the hearts of fans in his adopted Chicago.

Crafted from interviews with more than 700 sources, acclaimed sportswriter Jeff Pearlman has produced the first definitive biography of Payton. Sweetness at last brings fans a detailed, scrupulously researched, all-encompassing account of the legend's rise to greatness. From Payton's childhood in segregated Mississippi, where he ended a racial war by becoming the star of his integrated high school's football team, to his college years and his twelve-year NFL career, Sweetness brims with stories of all-American heroism, and covers Payton's life off the field as well. Set against the backdrop of the tragic illness that cut his life short at just forty- six years of age, this is a stirring tribute to a singular icon and the lasting legacy he made.

Jeff Pearlman is the author of four previous books, including two New York Times bestsellers-The Bad Guys Won! and Boys Will Be Boys. He is a columnist for SI.com, as well as a contributor to the Wall Street Journal. He blogs regularly at jeffpearlman.com. Pearlman and his family live in New York.