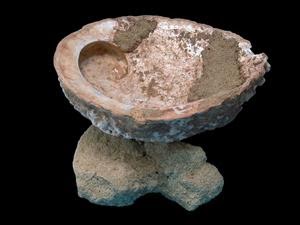 Grind up some ochre, melt some bone-marrow fat, mix the lot with a splash of urine – and paint your body with it. It sounds like an avant-garde performance but it may have happened some 100,000 years ago, in the oldest known artist's workshop – a cave in South Africa. The complex pigments that humans mixed there, and the tools they used to do it, are revealing just how cunning some of our earliest ancestors were.

The purpose of the paint is unknown, but the researchers who discovered the workshop at the Blombos cave on South Africa's southern coast think it was most likely applied to skin for decoration or ritual, or perhaps even as an insect repellent.

Inside the cave, Christopher Henshilwood of the University of the Witwatersrand in Johannesburg, South Africa, and his team found tools and two abalone shells that were used for mixing and storing the paint. Alongside one of them were quartzite stones used to hammer and grind ochre to a powder, and animal bones used to stir the powder with other materials, which included bone, charcoal, quartz fragments and other stones.

They also discovered evidence that some of the bones had been heated, probably to melt fat from the marrow that would have then bound the minerals. "There were also quartzite fragments to cement it, mixed with a liquid, probably urine," says Henshilwood.

The whole lot survived together in one place because after the cave was abandoned it filled with wind-blown sand, sealing the cache as a "time capsule", says Henshilwood.

Whatever our ancestors did with their paint, the simple fact that they were mixing minerals to prepare it 100,000 years ago is in itself a major discovery, and tells us something about our ancestors' cognitive abilities at the time.

For instance, Henshilwood points out that this is the first known use of containers from that time. What's more, the artists would have had to collect ochre and other materials with the specific purpose of making paint in mind – a sign that they were planners – and needed a "basic knowledge of chemistry".

The nearest known source of ochre, he says, is at least 20 kilometres away from the cave, so the find demonstrates that Homo sapiens was capable of this high degree of organisation and planning only 50,000 to 100,000 years after the species emerged.

"It's quite simply stunning, first-rate work, and unambiguously dated," says Paul Pettitt, an anthropologist at the University of Sheffield, UK.

"What takes this into the stratosphere is the degree of organisation, of intent and of industry," he says. "It's highly thought out, and repeated, so this is a systematic production of paint."

Could the paint have been used for murals rather than as body paint? Possibly, but no ancient painting has been discovered nearby. A few years ago, also in Blombos cave, the same team did find 13 engraved tablets of ochre, each about 2 centimetres square, bearing leaf-like or hatched designs. They are the same age as the abalone shells, and may have been some of the earliest lipstick.

Pettitt says that the earliest unambiguous art was made around 35,000 years ago, in the Chauvet caves of south-east France, and the earliest evidence of ochre pigment production dates from 60,000 years ago. The new Blombos find, however, shows that early humans were capable both of organised activity and of creatively making and using pigments much earlier than we knew before.