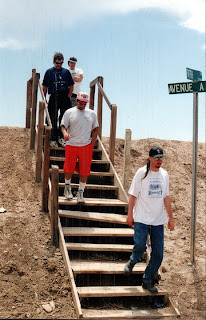 In the innocent days of early 2001, I recall renaming the program each week depending on what or who happened to be on the show. When discussing politics, I called the show “Mind Control.” I also started and ended the programs with a recording of Tibetan monks chanting, mixed with whatever struck my interest at the time. That week it was samples from broadcasts of “numbers stations.”

On March 1st, Rob Sterling of the Konformist website, and later, the author of 50 Reasons Not To Vote For George Bush was scheduled by phone to discuss political intrigue in the form of what is known to most people as “conspiracies.” Just as we started the program, author Jonathan Vankin and his (then) wife and noted journalist Deb Vankin walked into the studio unannounced, so I gave them a microphone.

What followed was an unexpected meeting of the minds on the effects of the Bush family on American politics, police brutality at the recent Democratic National Convention, and Jonathan’s books The 50 Greatest Conspiracies Of All Time and The Big Book Of The 70s. The current hot topic of Napster’s legal battles also came up. Of course, anything else that came to mind was also fair game and the conversation was stimulating and informative as always when sharpies like these get together.

Through the wonders of modern technology, this program was digitized from the original 90 minute cassette tape recorded over a decade ago.
Posted by Robalini at Sunday, October 16, 2011