Is Our Universe a Hologram? 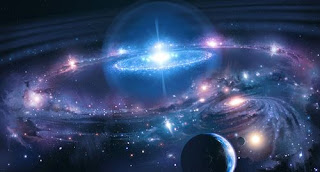 In 1982 a Litttle Known but Epic Event Occured at the University of Paris
September 29, 2011
http://www.dailygalaxy.com/my_weblog/2011/09/is-our-universe-a-hologram-in-1982-a-litttle-known-but-epic-event-occured-at-the-university-of-paris.html

What if our existence is a holographic projection of another, flat version of you living on a two-dimensional "surface" at the edge of this universe? In other words, are we real, or are we quantum interactions on the edges of the universe - and is that just as real anyway?

Whether we actually live in a hologram is being hotly debated, but it is now becoming clear that looking at phenomena through a holographic lens could be key to solving some of the most perplexing problems in physics, including the physics that reigned before the big bang, what gives particles mass, a theory of quantum gravity.

In 1982 a litttle known but epic event occured at the University of Paris, where a research team led by physicist Alain Aspect performed what may turn out to be one of the most important experiments of the 20th century. You did not hear about it on the Daily Show. In fact, unless you are a physicist you probably have never even heard Aspect's name, though increasing numbers of experts believe his discovery may change the face of science.

Aspect and his team discovered that under certain circumstances subatomic particles such as electrons are able to instantaneously communicate with each other regardless of the distance separating them. It doesn't matter whether they are 10 feet or 10 billion miles apart.

Somehow each particle always seems to know what the other is doing. The problem with this feat is that it violates Einstein's long-held tenet that no communication can travel faster than the speed of light. Since traveling faster than the speed of light is tantamount to breaking the time barrier, this daunting prospect has caused some physicists to try to come up with increasingly elaborate ways to explain away Aspect's findings.

University of London physicist David Bohm, for example, believes Aspect's findings imply that objective reality does not exist, that despite its apparent solidity the universe is at heart a phantasm, a gigantic and splendidly detailed hologram. Bohm was involved in the early development of the holonomic model of the functioning of the brain, a model for human cognition that is drastically different from conventionally accepted ideas. Bohm developed the theory that the brain operates in a manner similar to a hologram, in accordance with quantum mathematical principles and the characteristics of wave patterns.

To understand why Bohm makes this startling assertion, one must first understand that a hologram is a three- dimensional photograph made with the aid of a laser. To make a hologram, the object to be photographed is first bathed in the light of a laser beam. Then a second laser beam is bounced off the reflected light of the first and the resulting interference pattern (the area where the two laser beams conflate) is captured on film. When the film is developed, it looks like a meaningless swirl of light and dark lines. But as soon as the developed film is illuminated by another laser beam, a three-dimensional image of the original object appears.

In a recent collaboration between Fermilab scientists and hundreds of meters of laser may have found the very pixels of reality, grains of spacetime one tenth of a femtometer across.

The GEO600 system is armed with six hundred meters of laser tube, which sounds like enough to equip an entire Star War, but these lasers are for detection, not destruction. GEO600's length means it can measure changes of one part in six hundred million, accurate enough to detect even the tiniest ripples in space time - assuming it isn't thrown off by somebody sneezing within a hundred meters or the wrong types of cloud overhead (seriously). The problem with such an incredibly sensitive device is just that - it's incredibly sensitive.

The interferometer staff constantly battle against unwanted aberration, and were struggling against a particularly persistent signal when Fermilab Professor Craig Hogan suggested the problem wasn't with their equipment but with reality itself. The quantum limit of reality, the Planck length, occurs at a far smaller length scale than their signal - but according to Hogan, this literal ultimate limit of tininess might be scaled up because we're all holograms. Obviously.

The idea is that all of our spatial dimensions can be represented by a 'surface' with one less dimension, just like a 3D hologram can be built out of information in 2D foils. The foils in our case are the edges of the observable universe, where quantum fluctuations at the Planck scale are 'scaled up' into the ripples observed by the GEO600 team. We'd like to remind you that although we're talking about "The GEO600 Laser Team probing the edge of reality", this is not a movie.

What does this mean for you? In everyday action, nothing much - we're afraid that a fundamentally holographic nature doesn't allow you to travel around playing guitar and fighting crime (no matter what 80s cartoons may have taught you.) Whether reality is as you see it, or you're the representation of interactions on a surface at the edge of the universe, getting run over by a truck (or a representation thereof) will still kill you.

In intellectual terms, though, this should raise so many fascinating questions you'll never need TV again. While in the extreme earliest stages, with far more work to go before anyone can draw any conclusions, this is some of the most mind-bending metaphysical science you'll ever see.
Posted by Robalini at Thursday, October 06, 2011