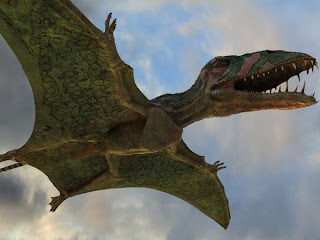 About the Narrator: Sir David Attenborough

Sir David Attenborough is the world’s leading natural history broadcaster. His distinguished career in television spans more than 50 years. His films and series have won nearly every major award in television, including two British Academy awards and several Emmys. His programs have been seen by audiences around the world and have received some of the highest ratings for factual programming. The DVDs of his series and his accompanying books have also sold millions of copies internationally.

Soaring to the giant screen in October, 2011!

For thousands of years, humans have believed that there were once flying monsters. Such creatures became mythologized, with stories about them shared around the world. But could they have really existed? About 220 million years ago dinosaurs were on the rise to dominating the Earth. But another group of reptiles was about to make an extraordinary leap—control of the skies. They were the pterosaurs—after insects, the first animals ever to fly. The story of how and why these mysterious creatures took to the air is more fantastical than any fiction.

In Flying Monsters 3D, Sir David Attenborough, the world’s leading naturalist, sets out to uncover the truth about the enigmatic pterosaurs. State-of-the-art, 3-D CGI (by creators whose credits include Harry Potter, The Chronicles of Narnia, and Avatar) re-creates these spectacular creatures and takes us into their world. Attenborough works with scientists and engineers to understand the incredible story of their evolution. It’s a story told through a series of stunning environments, including Big Bend National Park in Texas, Lyme Regis in the United Kingdom, and China’s remote Liaoning Province. In many ways the story of the pterosaur is the story of every creature that has ever flown.

As Attenborough discovers, pterosaurs were some of the most extraordinary creatures that ever existed. Pioneering scientific techniques have revealed new details about these creatures, from miraculous discoveries in the pterosaur embryo showing how they might have flown from birth, to CT scans of their skeletons that resolve mysteries that have perplexed scientists for decades. But it is their ability to fly that made pterosaurs revolutionary. When a lizard the size of a giraffe could “defy gravity,” it calls into question the very physics of flight itself. How and why did pterosaurs fly? For Attenborough, these are the central questions to answer and represent two of the greatest mysteries in paleontology. Driven by the information he finds and the data he collects, Attenborough starts to piece together the evidence of a true flying enigma.

Once in the skies, the pterosaur would have surveyed a fascinating world, and for the first time, through cutting-edge technology, we can relive this experience in 3-D. With a pterosaur’s-eye view of a hyper-realistic prehistoric Earth, the audience is immersed in the awe-inspiring challenges of prehistoric survival, from courtship and hunting to flying at 30 miles per hour across turbulent prehistoric oceans and swooping down on their prey. The 3-D technology is also fundamental to Attenborough’s evidence. The true genius of pterosaur flight is revealed as the audience “walks inside” the hollow tunnels of the pterosaur skeleton in hyper-realistic 3-D.

The marvel of pterosaur flight has evolutionary echoes that resonate even today. Modern birds demonstrate skills that pterosaurs pioneered, and American engineers show us how they are using pterosaurs to redesign military aircraft. Attenborough takes to the skies himself to prove the point. He flies a glider with a 40-foot wingspan—the same size as the largest of the pterosaurs. We can appreciate the size of these giant reptiles because he’s not alone—he’s flying with the pterosaurs. It’s a 3-D aerial ballet like no other. This is a moment to appreciate the magnificence of a creature that dominated the skies for 100 million years. As Attenborough explains how the age of the pterosaurs ended, he closes the final chapter of a story that has charted the rise of flight itself, undoubtedly one of nature’s greatest gifts.

Flying Monsters 3D is a groundbreaking film that uses cutting-edge 3-D filming technology and 3-D CGI to bring the story of giant flying monsters and their prehistoric world to life for audiences around the world.
Posted by Robalini at Sunday, October 09, 2011