Konformist Book Club: This Is Your Country on Drugs 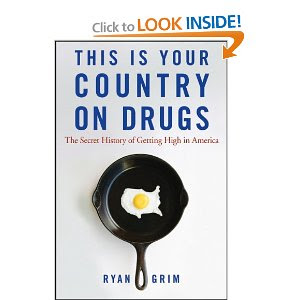 The Secret History of Getting High in America
Ryan Grim

Admitting that "so much has been written on drug use and American culture that it would take weeks to roll all of that paper up and smoke it," journalist Grim plunges into the counterculture, the literature, the research, the opposition, the pharmaceutical interests, the media coverage, the kids and users, the heroes and the hypocrites to chart the evolution of drug use in America, covering every illegal high, taking on well-entrenched myths and turning up fascinating stories on current trends-beginning with the end of LSD. Backed by plenty of startling facts (i.e., 1984's drug-related criminal population was 30,000; by 1991 it was more than 150,000), Grim fashions a sharp critique of anti-drug programs ("exposure to anti-drug ads led to higher rates of first-time drug use among certain groups, such as fourteen-to-sixteen year olds and whites") and other policy decisions (President Clinton's approval of NAFTA led to an unprecedented influx of drugs across the Mexican border). Grim isn't all talk, however: he barely survives on-site research during drug riots in Bolivia, goes through a typically fraught trip on ayahuasca, and scouts the battlefields of the fight to legalize cannabis ("In San Francisco, pot clubs quickly outnumbered McDonald's franchises"). This lively, personable history should strike fans of Martin Torgoff's Can't Find My Way Home as a worthy follow-up.

"One of the theses of This Is Your Country on Drugs -- a cornucopia of unconventional wisdom about our relationship to mind-altering substances -- is that the popularity of drugs waxes and wanes according to a complex sum of factors."
salon.com, July 20, 2009

"Atonishingly clear-headed and well-written, as if someone had taken David Courtwright and added just a splash of Hunter Thompson."
Mark Klieman, TPMCafe

"A wide-ranging, fascinating romp through the history of America's insatiable appetite for all manner of drugs, from opium to crystal meth, all the way up to the possibly soon-to-be-illegal hallucinogen Salvia divinorum."
The Philadelphia City Paper

Did anti-drug campaigns actually encourage more drug use? Did acid really disappear in the early 2000s? And did meth peak years ago? Did our Founding Fathers-or, better yet, their wives-get high just as much as we do?

Gives surprising answers to questions such as: how did heroin become popular, when did the meth epidemic peak, and has LSD gone the way of Quaaludes

Based on solid reporting and wide-ranging research-including surveys, reports, historical accounts, and more

Not since Eric Schlosser ventured underground to marijuana's black market in Reefer Madness has a reporter trained such a keen eye on drugs and culture. A powerful and often shocking history of one of our knottiest social and cultural problems, This is Your Country on Drugs leads you on a profound exploration of what it means to be an American.

From the Inside Flap

It's time to stock up on munchies, twist the caps off your water bottles, and get on the bus! You're about to embark on a cross-country tour of the complex, bizarre, and surprising history of drug use in America, a history that takes you from the Massachusetts Bay Colony, through New York's nineteenth-century opium dens, on to the Summer of Love, into the Midwestern "methedemic," and right up to today—where California has effectively legalized marijuana and the rest of the country is thinking of doing the same.

In This Is Your Country on Drugs, journalist Ryan Grim challenges everything you thought you knew about America's drug culture and how and when it began, who contributed to its growth, who opposed it and why, and what makes one drug surge in popularity and another fade.

You'll get the inside story on the huge DEA bust of an acid lab in an abandoned missile silo in Kansas that may have caused the disappearance of LSD in the early 2000s; find out how the temperance movement of the nineteenth century encouraged the use of opium, cocaine, and other narcotics; and discover the link between drugs and the birth of the modern mass media.

Drawing on many sources, both historic and contemporary, Grim asks penetrating questions about America's drug habit. Has the war on drugs done anything to reduce drug use? If all drugs were made legal, would we end up re-criminalizing them? Did our founding fathers—and especially their wives—get high just as frequently as twenty-first-century Americans? Is the crack epidemic really over, if it ever even existed? Did Ronald Reagan inadvertently cause the cocaine boom of the 1980s by going after pot smokers? Did NAFTA open the door for Mexican meth to take over the Midwest? Why do Americans use drugs at a far higher rate than any other people in the world? Why do we put alcohol in a class different from every other drug? Grim's answers are, to say the least, startling.

He also offers thoughtful insights into why different people and groups use different drugs. In a hilarious anecdote about a concert by Andy Warhol's speed-driven performance-art troop Exploding Plastic Inevitable before an audience of pot-smoking, acid-dropping hippies at San Francisco's Fillmore Auditorium in 1968, Grim reveals the connection between lifestyle and drugs of choice, as well as what happens when drug cultures collide.

Complete with revelations about the role of major pharmaceutical companies in both the introduction and eventual criminalization of such drugs as heroin, cocaine, amphetamines, and others, This Is Your Country on Drugs is more than a powerful, fascinating, and often shocking history of one of our knottiest social, cultural, and criminal problems; it is a profound and disturbing exploration of what it means to be an American.

Seven surprising consequences of the U.S. approach to drugs—find out the facts in THIS IS YOUR COUNTRY ON DRUGS
Past antidrug campaigns actually encouraged drug use.

The meth epidemic peaked a long, long time ago.

NAFTA opened the border and created a bonanza for cocaine and meth traffickers—just as President Clinton knew it would.

President Reagan may have inadvertently caused the crack epidemic.

Kids today are doing fewer illegal drugs than kids from any time in the recent past, and for a surprising reason.

The fastest-growing drug in America is a legal hallucinogen you can buy on the Internet.

Ryan Grim is the Huffington Post's senior congressional correspondent and has written for Slate, Rolling Stone, Harper's, and the Washington Post.

Email ThisBlogThis!Share to TwitterShare to FacebookShare to Pinterest
Labels: Drugs