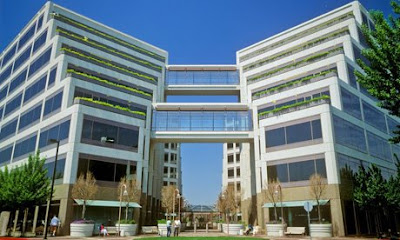 Apple’s corporate headquarters in Cupertino. Hi-tech rival Google is based only five miles away in Mountain View.
Photograph: Alamy

The sleek, touchscreen iPhone has proved so lucrative for Apple that the electronic gadgets manufacturer has unseated Google to become the most valuable company in America's cradle of technological innovation, Silicon Valley.

Queues outside Apple's stores are commonplace since the phone's launch a year ago as shoppers line up to get their hands on the prized device.

On Wall Street, the phenomenal popularity of the phone has fuelled a 44% surge in Apple's share price in 12 months. By the close of trading on Wednesday, Apple's market value had edged up to $158.8bn - a shade ahead of Google's $157.2bn.

Apple's predominance amounts to a shift in the balance of power in the hi-tech world. The company has repeatedly been able to eclipse rivals with its distinctive, easy-to-use designs. The iMac and the iPod continue to be firm favourites among laptop computer buyers and music fans.

Meanwhile, Google's once dazzling star has waned slightly as America's economic slowdown has eaten into online advertising and investors have wondered how the company can produce solid profits from expensive ventures such as the video-sharing website YouTube.

Scott Kessler, an equities analyst specialising in technology at Standard & Poor's in New York, said the twin fortunes of Apple and Google were central to the technological landscape: "These are the two companies most currently identified with the notion of innovation - not just in Silicon Valley or in this country but arguably in the world."

The milestone amounts to a reassertion of success by an older technological generation. Apple was founded by schoolfriends Steve Jobs and Steve Wozniak in 1976 making it elderly in comparison to Google which has only existed for 10 years.

Experts say Apple's distinctive skill is its ability to reinvent itself with new products which are typically kept secret until the last possible moment.

"It's one of the few companies that has been able to internally develop a number of blockbuster products and killer applications," said Kessler.

Apple fans tend to attribute a large chunk of the company's success to the personal entrepreneurial instincts of Jobs, who is chief executive and is heavily involved in product development. When Jobs appeared to be gaunt and thinner than usual, Apple's stock briefly slumped last night before the company scotched rumours that he was ill.

While Apple and Google differ widely in their business models, they have a degree of personal overlap. Google's chief executive, Eric Schmidt, sits on Apple's board as a non-executive director. The companies are based barely five miles apart in a sprawling hi-tech corridor running south of San Francisco. Apple is in the town of Cupertino while Google is in neighbouring Mountain View.

Neither company offered any immediate reaction to the shift in supremacy. Apple did not return calls and a Google spokesman said: "We never comment on our stock price."

However, Apple has had few qualms about boasting of its prowess in the past. When the company's value overtook the computer maker Dell two years ago, Jobs sent out a companywide email reminding staff that Dell's founder had once predicted Apple's imminent demise.

"Team, it turned out that Michael Dell wasn't perfect at predicting the future," wrote Jobs. "Stocks go up and down, and things may be different tomorrow, but I thought it was worth a moment of reflection today."

For Apple, the iPhone has provided an edge in creativity and convenience. When a 3G version of the phone came out last month, Apple sold a million of the handsets in a single weekend.

Google is comfortably the global leader in online searches but has seen slowing growth in "paid clicks" - the number of times users alight on lucrative advertisements. Google says this is because better tailored advertising has led to better quality, but less numerous, clicks.

Google's shares, which topped $700 late last year, have settled back to just over $500 - but the company's founders, Sergey Brin, 34, and Larry Page, 35, remain billionaires who travel the world on a customised Boeing 767.

The pair see conquering space as their next challenge and have put up a $20m prize to anyone who produces a privately financed spacecraft able to land on the moon.

· Founded in a bedroom in Los Altos, California, by schoolfriends Steve Jobs and Steve Wozniak in 1976

· Recently settled a long trademark battle with the Beatles' record company Apple Corps, over use of the word "apple" to sell music

· Began as a computer manufacturer and has diversified into iPod media players, iTunes online music sales and, most recently, iPhone touchscreen mobile phones

· Based initially in a garage in Menlo Park, California

· Has expanded from a powerful internet search engine into online applications such as word processing and spreadsheet tools, and owns the video-sharing website YouTube

· The company slogan is "don't be evil"