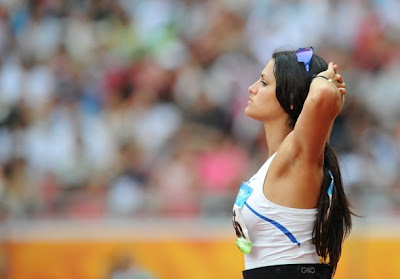 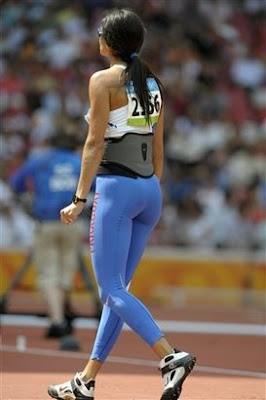 Leryn Franco is just your run-of-the-mill javelin thrower/pageant queen/model with her own calendar. But during the Beijing Olympics the 26-year old Paraguayan became so much more to the American people; she became our javelin thrower/pageant queen/model with her own calendar. So, my fellow Americans, it is with a heavy heart that I regret to inform you that our favorite Paraguayan athlete (sorry Jose Luis Chilavert) was eliminated from the Olympics this morning after failing to qualify for the javelin finals. Take all the time you need.

Ms. Franco became the object of our attention after she was noticed by NBC cameras during the Parade of Nations at the Olympic Opening Ceremony. Fourth-Place Medal's fledgling Investigative Unit discovered her identity eight magical days ago and since then our schoolboy crush blossomed into unrequited love.

Leryn -- can we call you Leryn? -- didn't return our collective calls, but we didn't mind. We knew she was busy preparing for her event: the javelin throw. She competed this morning, finishing second-to-last in the qualifying round with a throw that was 12 meters short of her personal best. It was a disappointment, to be sure, but not altogether surprising. After all, Leryn's goal was never to medal; it was to win the hearts of men and women worldwide. And in that event, Leryn Franco won gold. 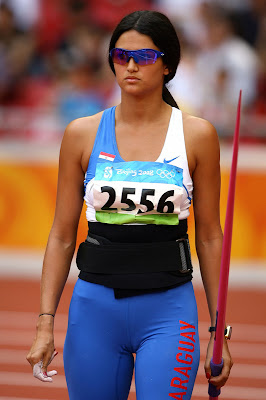 OMG OMG what a pretty lady! She rocked my world since the first time I saw her practicing this exciting sport. I don't like paraguayans so much, but I could help her to find out another uses javalin has. :-P