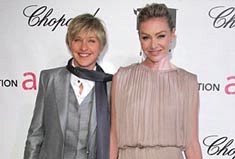 It was the royal wedding of Hollywood lesbian marriages when Ellen Degeneres and Portia di Rossi said “I do,” Saturday in a small ceremony at their Beverly Hills home, surrounded by their closest friends and family, according to reports by Us and People magazines.

During an emotional announcement on her talk show last May, Degeneres announced that she and her partner di Rossi would marry, after the California Supreme Court’s May ruling that overturned the state’s ban on gay marriage.

There were 19 people in attendance for the wedding, including Degeneres’ mother Betty Degeneres and di Rossi’s mother, Margaret Rogers, who flew in from Australia to attend the event, People.com reported Saturday.

For the ceremony, di Rossi wore a backless light pink dress with a train while Degeneres sported an all white ensemble of pants, shirt and a vest, according to Us.

"Ellen and Portia came out and posed for pictures with Ellen's mom and their two dogs. They were hugging and kissing, and looked ecstatic. Ellen was helping Portia with the train of her dress, which looked like a Cinderella tutu,” a witness told Us.

Following her fourth consecutive Emmy win in June, Degeneres announced that a date for the wedding had not been set but that once the pair tied the knot that she would show “a tiny bit” of the nuptials on her show.
Posted by Robalini at Thursday, August 21, 2008